75 Years in the Air: Air Scouts Celebrate their Anniversary!

To celebrate 75 years since the official founding of Air Scouts in the United Kingdom (UK), a celebratory National Air Scout Camp was held in late October in Cornwall in the southwest of England. Although only founded in 1941, Scouts – in Britain and abroad – have been practising air activities since the early days of aviation, with Baden Baden-Powell, Robert Baden-Powell’s youngest brother, playing an active role in the early years.

Some 300 (out of approximately 2000) Air Scouts from all over the country aged from 10 to 18 and their Leaders attended this event to share and learn Scouting and aviation experiences and be inspired by some of the professionals in aviation sports and flying. New friendships between participants and plans for future closer co-operations by Air Scout Groups were a natural side effect.

Getting the aircraft ready for the next flight.

“Although of course all Scouts in the United Kingdom have the possibility to participate in aviation themed activities and challenges as well as working towards gaining related specialist badges, the Air Scout Groups try and “flavour” all their weekly Scout programmes with an “air” element”, explains Chris Shaw, a UK Air Scout Leader now living in Austria, where he has recently helped to revive Air Scouting (see our story from 2013 about the Upper Austrian Air Scout Camp “Belt-Up”).

Attendees practiced in various science based Scouting challenges, practised hands-on glider and aircraft flying using modern simulators, and – one of the highlights – tried paragliding by being towed behind a vehicle (and survived to tell the tale). 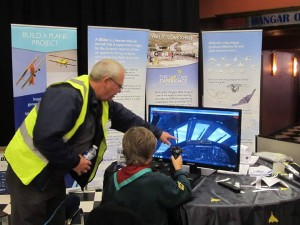 Receiving Training at the Flight Simulator.

The Air Scouts camped near to the local regional airport which hosted tours of operational areas such as the Weather Station, Fire Station, the Air Traffic Control Tower, and the Coastal Helicopter Search and Rescue Centre providing a “talk and show” with an actual landing from the regional Air Ambulance Helicopter on the campsite for operational reasons. 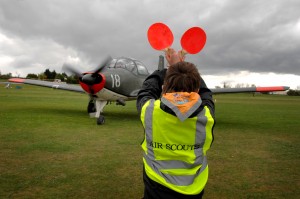 Chris spoke with some of the participating Air Scouts to find out why they had joined this particular branch of the Scout Movement:

Harrison, aged 12, was previously a Sea Scout and joined an air Scout Group a year ago remembers: “My favourite activities this weekend were the different science challenges. Designing an “Egg Lander” parachuting system was challenging as no one wanted the raw egg crash on landing!”

Chelsea, aged 10, from Canvey Island Air Scouts in Essex, loves being an Air Scout: “The activities I can do in Air Scouting help me to tackle scary things and overcome my fears.” Chelsea moved up from Cubs earlier this year: “I have already made lots of new friends and at school my friends are amazed when I tell them what we are doing at our meetings in our Air Scout Group.” 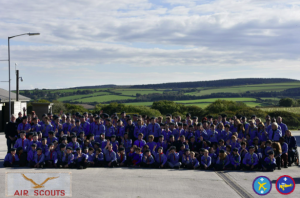 Celebrating 75 Years of Air Scouting in the United Kingdom

Another participant from Bristol, Callum, aged 13, has been an Air Scout for nearly two years. “I have already been gliding with an instructor and also tried out the sport of hover crafting. It is a bit like learning to ride a motorbike – I just love it!” His Air Scout Group is currently building their own hovercraft. Some if his friends are envious of the activities he has managed to do with his Air Scout friends: “My friends kept asking me what we were doing, so I decided to invite them to come along to our meetings!”

Anne-Cécile is 17 years old and a Young Leader working with the youngest section. And she is Air Scout in her local Explorer Unit, where she gained her gliding pilots licence when she was only 15 years old. “When I was ten and had joined Scouts, I was very lucky because the Group had only just decided to become an Air Scout Group! Being an Air Scout and learning to fly a glider with all the diverse skills required, has given me bags of self-confidence and I am sure will help me in my future career!”.