Last month, Eurosea13, the 13th European Sea Scout Seminar, was held in Puck, Poland. Every two years, this event brings together Sea Scout Leaders from across Europe, whose common interest is to network, exchange latest programme developments and address challenges they face in their work on local or national level.

Nuno Jacinto, from Portugal, outgoing chairperson of the Network’s committee explains the functioning of the network: “A group of peers elected (every two years) by the participants constitutes our Committee, the so-called Odysseus Group, whose members are responsible for planning the next Eurosea Seminar (the host association is selected following presentations of bids) and to foster close cooperation between Sea Scout branches of National Scout Organisations and National Scout Associations in the European Scout Region and to maintain regular iinformation exchanges within the network itself and with the Scout Movement at large.” 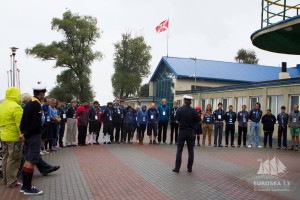 A good mix of training and sharing sessions as well as practical workshops had been put together by the Odysseus Group and the Host Team from ZHP. The topics addressed included risk assessment for Seascouts (‘No risk no fun’), quality management in a Sea Scout Group (‘Quality & Sea Scouting), growth as well as strategy development.

“Among the highlights this time,” recalls Nuno, “was once again the colourful International Evening where each Sea scout branch presented its work and specialities from their country. This was only beaten by the memorable cruise aboard the Polish Sea Scout ketch s/y Zawisza Czarny (The Black Eagle), which is the largest tall ship owned by Sea Scouts!” 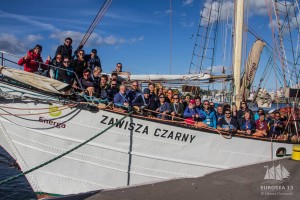 Apart from the Black Eagle, participants had opportunities to practice Sea Scouting on smaller boats and yachts in the company of local Sea Scouts.

As part of business decisions the participants elected the new members of the Odysseus Group: Laura Simarro (Spain), Thaïsa van Speybroek (Belgium), Werner Strobel (Austria), Wiktor Wróblewski (Poland), Ernst-Jan Jacobsen (The Netherlands), and the new chairperson Kristine Clemmensen-Rotne (Denmark). The team will lead the network for the next two years and, together with a local Host Team, plan Eurosea14, which will take place in 2018 in Barcelona, in Spain.

Further information about the European Sea Scout Network is available on the internet and on Facebook!

Contributing to the text: Izabela Saniewska and Hania Domurat from the Host Team of Eurosea13