Use Your Skills and Experiences to Help Creating a Better World!

The Scouts of the Nation Award is the highest achievement for youth members of Σώμα Ελλήνων Προσκόπων (Scouts of Greece, the National Scout Organisation of WOSM – the World Organization of the Scout Movement in Greece) and is presented to the recipients by the President of the Hellenic Republic at a special ceremony in Athens in irregular intervals.

The following text is a rough translation of the address given by His Excellency Προκόπιος Παυλόπουλος (Prokopis Pavlopoulos) during this year’s Scouts of the Nation Award Ceremony which took place in the great hall of Athens College on 19 March 2016. 248 Scouts from all districts of the association received the distinctive scarf and badge as recognition of their personal achievements in the Scout Movement.

Dear Scouts of the Nation,
Let me congratulate you for the recognition of your achievement! But let me also tell you, that this recognition is not an ending. It marks a new beginning: the beginning of a new mission for you. A mission which is determined by the two mottos on your Scout emblem: the first given to you as a heritage in 1915 by Eleftherios Venizelos: “Always achieve excellence and prevail above others” (αἰὲν ἀριστεύειν καὶ ὑπείροχον ἔμμεναι ἄλλων) as it was written by Homer in Iliad. And the second: “Be prepared” (Έσο Έτοιμος), which is the universal motto of the Scout Movement. Both mottos describe very well what Scouting and the Scout Movement is all about, not only in Greece but all around the world. What it means to be to be part of a volunteer movement, of a movement of solidarity and service.

As Scouts of the Nation you have now received the distinctive scarf and badge as visual recognition of your achievements. A distinction awarded by the Greek Nation. Your mission from now on evolves from our society and the position of Greece in the world! 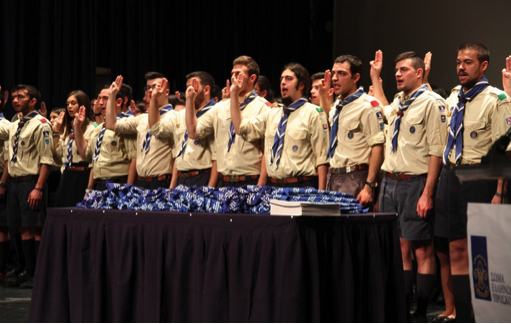 New Scouts of the Nation renewing their Scout Promise

Above all, serve our society; a society that suffers and it is caught up in the maelstrom of a deep social and economic crisis. Help your fellow human beings, as you have learnt to do. Thanks to you, thanks to values lived and transmitted in our families and by the Church, our society fortunately has not exploded yet, and it definitely will not do so! Divisions appearing in the social fabric will be avoided.

But there is another, very substantial mission: we are witnessing, especially here in Greece, a refugee tragedy. We experience and encounter this crisis as it fits our people: nurtured by the ancient Greek spirit and based on Christian teaching, placing the human being in the centre of all. Three principles prevail: humanism, justice, and democracy. This is the way we behave and teach: by example!

Dear Scouts,
The foundations of the European family are the same ancient Greek spirit, the institutions of ancient Rome and Christian heritage. Based on these, one would expect all partners of our European family to show solidarity for other human beings and to those suffering. Regretfully, it is not the case at the moment. Luckily, those not showing this solidarity are but a few. They are conquered by phobic syndromes, show isolationism and anti-democratic spirit. There are even partners within and outside the European family who put up fences and barriers.

H.E. The President of the Hellenic Republic with the 248 new Scouts of the Nation

Your mission, as Scouts of the Nation and members of the Scout Movement, a global community of more than 30 million young people, is to take the initiative and to reach out to your friends in the Scout Movement, and in particular Scouts in such countries that are victims of fear syndromes, and to tell them that Scouting, through its values, needs to and can show the way forward: the path of humanity, the path of civilisation, the path of spirituality.

So, take this opprotunity, contact your friends and tell them that all Scouts here in Europe can unite more than anyone else as the people of Europe; so hat, all together, we will be able to confront this current tragedy, in this crucial moment of European history. Now is the time for the European family to demonstrate its strength and show the world which values it stands for.

God bless you, dear Scouts of the Nation, your fellow Scouts, your families and friends and have strength on your continued mission!