The word on Youth Empowerment is out and we are beginning to see how it is causing an impact in the associations. In 2015, Romania organized its first Rover Forum. We asked Cristi Stavarache, from the planning team, to tell us this story of youth empowerment from his own empowered perspective.

“In 2015 we organised the first Rover Forum in Romania. Because the Rover section in Romania only began six years ago, we wanted to know if the system is working. What are the problems being encountered? What changes are needed, if any? Is our symbolic framework and individual development system adequate? These were themes of our first Rover Forum.”

“Besides, we also wanted to include a discussion about youth empowerment, because I participated at the youth empowerment session during the Agora last autumn, which I found interesting and very motivating. That why I thought that we could use a session at our Forum to show that you can do things and be motivated. As Rover Scouting is still in development in Romania, there are a lot of things to do and to figure out. This session was great for the participants because it helped them develop their perspectives of how they can achieve things.” 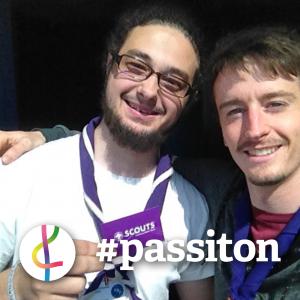 Cristi (RO): Youth Fora are one of the many ways through which young people can be empowered!

“There were a number of workshops and the participants were encouraged to think about the problems and challenges they face, such as lack of motivation, and those linked to the transition from the Venture to the Rover Section, which needs to be more direct and focused on taking responsibility. There was also a creative platform session in which the participants developed some projects that we strongly suggested that they implement with their local groups once back at home:”

What was the hardest thing for you in organising the event?

“We had no background of any event like this, as this Rover Forum was the first edition. We had to figure out what exactly we wanted to do, what we had to do. I knew some of the people in the team, but not that well. We really had to talk that through in the beginning and see what were our real needs, as well as get an idea of which outcomes we wanted to reach. After that, things got easier. Not easy, but easier.”

Looking back, what aspect of the Rover Forum makes you the happiest?

“Well, the feedback from the participants was excellent. They really thought that this kind of event was needed. They liked that they could bring something to the table and they went home convinced that they could change something about the Rover Section in Romania. And they appreciated that their voices are heard and taken seriously. Because, in the end, it is about them, not about us, the Cubs, the Ventures or the Leaders. It is about what they want. I think, finally, their voice got through and they were really excited about that.”

Youth Fora are increasingly occurring in National Scout Associations across Europe, fostering young people’s participation in the discussions that concern them and involving them in decision-making processes in associations.

Is there a youth forum in your country? Would you like to know more about youth fora and/or how to organise one? Read the document “For Rovers, by Rovers: Guidelines for having a successful Agora” published by the European Scout Region of WOSM.