All Groups Meeting in Budapest: Thinking Together and Reflecting for the Future

Some fifty Regional Volunteers, Committee members and members of the staff of the World Scout Bureau Europe Support Centres of the World Organization of the Scout Movement (WOSM) spent a long weekend at the European Youth Centre Budapest.

On the busy agenda: a regular meeting of the European Scout Committee, the annual All Groups Meeting (which brings together all regional volunteers engaged in the Region’s five working groups) and a staff meeting. The main focus of all three meetings concerned a review of progress made in achieving objectives set in the current Regional Scout Plan and streamlining plans of actions of the different working groups for the remaining months of the current triennium (which will end on 30 September 2016). 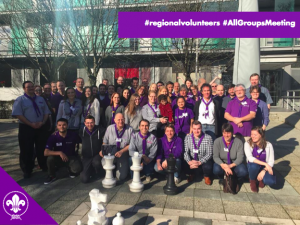 The Family Photo of the 2016 All Groups Meeting

The second major item was related to the upcoming 22nd European Scout Conference (held in the framework of the 15th European Guide and Scout Conference in June 2016 in Norway). During this Conference delegates from the 40 National Scout Organisations (NSOs) in the European Region of WOSM will – amongst other matters – discuss and approve the next Regional Scout Plan for the triennium 2016-2019, which will form the basis of activities in the Region. 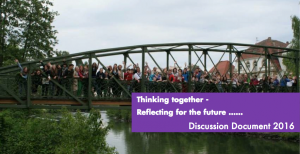 A proposal for a draft Regional Scout Plan 2016-2019 developed by the European Scout Committee following discussions with NSOs during the European Scout Symposium (Skopje, December 2015) and the recent International Commissioners’ Forum (Gdańsk, January 2016) has now been sent out to all NSOs and NSAs in the Region for consultation. Feedback and comments received from the association will incorporated into the final draft Regional Scout Plan 2016-2019, which will be tabled as Conference Document later this spring.

Participate in the consultation process of your NSO or NSA and make sure the deadline of 10 March 2016 for relevant feedback is not missed!

We would like to thank the members of the Országos Külügyi Bizottság (International Committee) of the Magyar Cserkészszövetség (Hungarian Scout Association) for their organising two excellent evening programmes during the meeting!