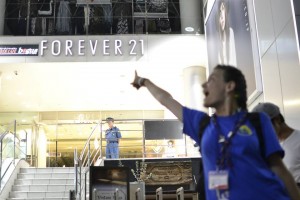 What are the normal activities of a 21 year old? Being a student, going out with friends, having fun, thinking about what master course they should start next, going on camps or on an Erasmus experience… being a Rover… or is that just a stereotype?

We just discovered a pretty interesting story about two not very common 21 year olds. Two girls of 21 who juggle so many things, it would make your head spin! And guess what? They’re scouts, and they’re real proud of it too!

At 21, Lana Husagić from Bosnia and Herzegovina and Ioana Frincu from Romania were the two youngest Heads of Contingents at the 23rd World Scout Jamboree in Japan. For both of them the position has been a challenge, as it is 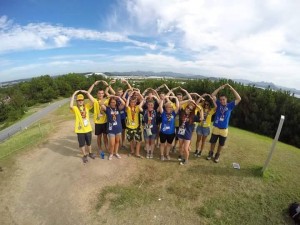 for any HoC. Lana was appointed to it only in March: “After our first HoC resigned in March, I took over the function and started with the preparations almost from the beginning. It was a time battle, but our team managed to organize this incredible journey for 15 of our members (plus 5 in Operation Kirara). We had one patrol, 4 IST’s and me, as HoC“. She took on the hard work without a blink, on top of the final year of her bachelor studies as a psychologist and the position of International Commissioner for the Council of Scout Associations in Bosnia and Herzegovina.

Leading the largest WSJ Romanian contingent for the past 20 years, Ioana is juggling her studies in “Computer Science and Information Technology” with a full time job for IBM and the position of an Executive in the International Department in the National Organisation of Romanian Scouts. “If someone would’ve told me one and a half years ago that I will be 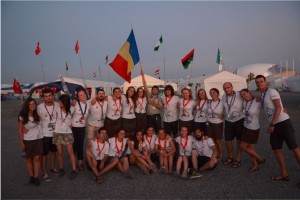 HoC for the next Jamboree, I would have been at least skeptical about it” is what Ioana will tell you if you ask her how long it took her to decide to apply for the HoC position. She has never been in a World Scout Jamboree in her life, but she loves a good challenge! “I never got the chance to be a participant myself at a World Scout Jamboree, so the experience was completely new both for me and the greater part of our Contingent. I expected the unexpected and I must say that I was right”. Both Lana and Ioana are showing everybody what the true meaning of “youth empowerment” is. And the results are pretty interesting…

A completely new culture, over 33 000 people, 3 planes and more than 24 hours on the road for one way, underaged participants to take care of, costs and budgets to 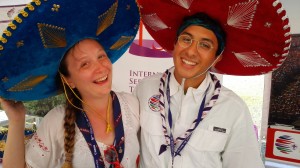 manage, a country to represent and… the ever concerned parents calling to make sure that a 21 year old has what it takes to be a good leader. Although they live in different countries, these facts stayed the same for both Lana and Ioana. Another common point for any HoC comes out from Ioana’s statement: “Managing different people with such different opinions is definitely not easy. Of course, there are pros and cons for every decision and walls to tear down in order to prove your point. Fortunately, in the long run, it seems that the decisions I took benefited the most.”

Lana continues the story with an inside view on the Jamboree experience: “It was very hard to manage all the meetings and receptions on site, because I was the only CMT, as well as youngest one (age 21) and probably with least experience. However, I had a full support from my IST friends, so together we managed to organize a suitable schedule for shifts in World Scout Centre, meetings, receptions, visiting and dealing the problems of our patrol and of course- for having amazing time during free activities.” 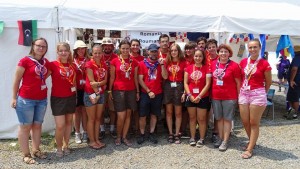 The Jamboree came also with surprises for the Romanians: “Our contingent had the wonderful chance to meet up with Joao Goncalves and the participants had time to talk to him and ask him more about what it is like to be the Chairman of an organisation with over 40 million members… They all were so surprised to see Joao in person and definitely inspired by his words”.

Looking back at the almost 6 months that passed since she took charge of the Bosina and Herzegovina’s contingent, Lana concludes “I learned a lot from this experience- that young people are capable and competent to organise large-scale events such as Jamboree, and how important it is to have a support of your NSO and elderly scouts in doing so. In the end, team work, willingness and positive attitude contributed to having an amazing Jamboree for all 20 BiH contingent members, making this the story of our lives”. 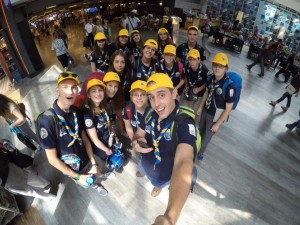 ion is proud to have shown what trust in young people can achieve! Both Lana and Ioana came home tired, but happy, with only good memories to share from the 23 World Scout Jamboree experience. The spirit of unity of the event was real for them, and still is now, bringing them back together in this little story about two powerful, optimist and pro-active young women who are not afraid to work towards creating a better world no matter how many things they have on their plate. Lana and Ioana- 21 HoC and Proud!