#ScoutRESPECT: Our Motto on the International Day Against Homophobia and Transphobia

(WSBERO/Geneva) – Each year, 17 May is commonly know as “IDAHOT” – the International Day Against Homophobia and Transphobia. This is why the European Scout Region’s Diversity and Inclusion Working Group has chosen this day to launch the third image of its #ScoutRESPECT campaign.

It is an excellent opportunity to share the following testimony with you. It is from Abigail, a Venture Scout with Scouting Ireland. She is also a member of the LGBT+ community. And this is her story: 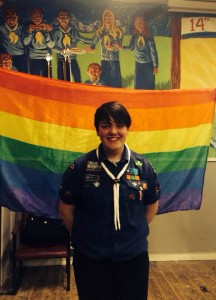 When I was young I always kind of knew that there was something different about me. I never had anybody in my life who was LGBT+ until about 2010. I was 11 years old and was at County Camp, the first of many great ones to come. I met a friend there, and to this day we still are best friends. I remember about 10 minutes into the conversation he turned around and told me that he was gay, but not to tell anybody as most people didn’t know. I had never known about LGBT+ until he said it to me and I went home and searched the internet like crazy, getting as much information as I could retain.

It was several months later when it clicked that this is what was up with me, I was LGBT+. The sense of relief that came with this discovery was next to nothing, absolutely amazing. It was at the next County Camp that I came out to him as bisexual. Over the coming years I met made many friends in scouts who were LGBT+ and we all immediately connected. I remember a group of around 15 went to the cinema and out of the 15 only 3 were straight. We all knew that we weren’t all straight, it was like something we all had in common. We never openly talked about it, unless we wanted to or needed to, but we knew that everyone of us went through the same thing, that we were all connected in some way.

I started to become a lot more comfortable with myself and I knew that I wasn’t alone. It wasn’t until several years later that I began to further my knowledge of LGBT+ and I realised how fluid it was. I no longer identified as bisexual, I now identified as pansexual.

To me it means that gender isn’t something that comes into play when liking somebody. It’s almost being blind to gender. With this my gender was never exactly simple. Basically gender is all in your head, whereas sex is to do with your physical body with things like chromosomes and genitalia. In my head, I was never exactly female. It was always, and still is, constantly fluctuating. I’m never exactly male or female, most days I’m in the middle. With scouting this is perfectly OK. I don’t have to be in a set binary.

I am a Scout and there’s no more to it than that. As long as I follow the scout law and uphold my promise I am accepted. If there ever is an issue, it’s dealt with in a serious manner and very efficiently. Everybody has one another’s back, it’s so incredibly supportive and I am proud to call myself a Scout.

And you? Have you had similar experiences in Scouting? Why not share them with our readers?

More about the European Scout Region’s #ScoutRESPECT campaign
Message by Michel Sidibé, Executive Director of UNAIDS on the occasion of IDAHOT 2015