Scouts at the Youth Work Convention: Underlining Importance of Youth Empowerment and Calling for More Diversity and Inclusion

(WSBERO/Bruxelles) – Last month, the 2nd Youth Work Convention, five years after the first, brought together some 500 participants active in the youth work field. The aim of the Convention – organised in the framework of the Belgian presidency of the Committee of Ministers of the Council of Europe – was to identify the common ground on which all youth work stands and its relation to wider agendas of concern to public policy and issues facing young people.

In the context of ‘what brings us together is stronger than what divides us’, the expectation from the Convention was to give a new impetus to the political and institutional debate around Youth Work in Europe, in order to foster further development and stronger recognitions. 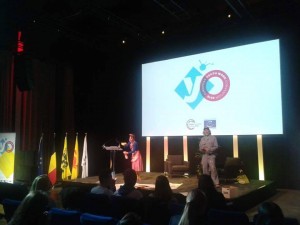 The aim of delegates from the World Organization of the Scout Movement (WOSM) was to ensure that the values and methods of Scouting were recognised and reflected in the Convention’s Final Declaration of the convention.

“The Convention emphasised active citizenship and calls for more inclusion and diversity in the field of youth work,” explains Martin Meier, one of WOSM’s delegates at the Convention, adding that these were two key objectives of WOSM as well.

“Furthermore, the Final Declaration stresses the importance of quality within youth work”, highlights Martin, “and in the discussions about quality, WOSM’s tools for ensuring a high quality in youth work were used as an example!” 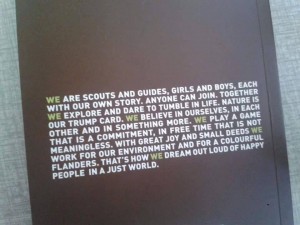 Scouts take an active role in the event: sharing their experiences

Another main point for all participants was the question what youth work could do to increase employability of young people. “Valeroise-Toi” – a tool developed by Scouts et Guides de France, a member organisation of WOSM, which has since been made available in a number of different languages – was identified as a valuable example for other youth organisation to use as well. It is easy to use and has proven to have a high impact.

In its Final Declaration, the Convention also underlined the importance of Youth Empowerment and the recognition of Youth Work on national and European levels: two areas of work WOSM is actively engaged in. 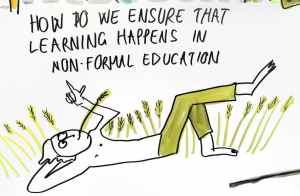 Importance of recognition of learning in non-formal educational settings

“The difficulty of the Convention was to find common ground,” regrets Martin, “there were very large discussion groups and the delegates came with a multitude of backgrounds and experiences – teachers, paid youth workers, social workers, volunteers etc.”

This is reflected in the relative broadness of the Final Declaration of the 2nd Youth Work Convention:

For more details about the 2nd Youth Work Convention please refer to the event’s website as well as its Facebook page  and Twitter channel.
And here is the full text of the Final Declaration in English.