(Belfast/UK WSJ Unit 62) – With a little over 100 days left before the opening of the 23rd World Scout Jamboree in Japan this summer, national contingents are busy preparing what will no doubt be an exciting adventure and lifetime experience for thousands of Scouts from Europe.

“We have been very active over the last couple of months”, explain Danielle and Peter, two of the four Leaders of the Northern Irish Unit 62 of the UK Jamboree Contingent (36 Scouts from different local Scout Groups across the country).

“Last month, 38 members and supporters of Unit 62 abseiled down the 50m high facade of the Europa Hotel in Belfast to raise money to help them and Scouts from less developed countries attend the World Scout Jamboree in Japan this summer”.

“During the past couple of months, our Unit 62 has been visiting local Scout Groups all over Northern Ireland to run Japan nights. Our Scouts offered a wide range of activities, including origami, games and quizzes, chopstick races, culture demonstrations and even some basic Japanese language lessons”, Peter looks back, adding that the Unit also used these events to sell the UK Solidarity badge which helps other National Scout Organisations to send young people to the Jamboree. 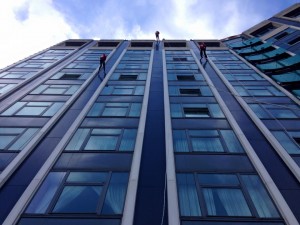 Standing outside the Europa Hotel in Belfast Mark points out that he had abseiled with Scouts before on a climbing wall, but never off the front of a hotel. “This was a great challenge and I would do it again anytime. I am also very proud that my mum Tanya did the same exercise!”. His friend Tara, who completed the abseil with her mum Wendy, adds: “It looks so much higher when you are up there looking down. The hardest part is going over the edge and trusting the harness and ropes. It was great fun though!”

Danielle looks back on several busy months: “As part of the training and activities helping prepare the Scouts for the trip to Japan, we have tried a lot of new and interesting things.” These included setting up and running a special Belfast Monopoly Challenge, a visit of a local Japanese restaurant to learn how to make sushi, or experiencing 40 degrees at 83% humidity in an acclimatisation chamber at the University of Ulster Sports Science Laboratory.

“We also reached out to the local Japanese community to teach us some basic Japanese. And we practised earthquake and tsunami drills. Because you never know!” recalls Mark. 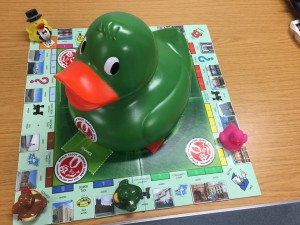 Another successful fund raising feature of Unit 62 is Saffron, the Duck. Peter explains: “At one point, the Unit considered how best it could help spread the word of Scouting and to raise some funds among friends, families, neighbours and other fellow citizens. This is when Saffron was born. Saffron is called after the colour of the Northern Irish kilt.”

The name is also a link to the Unit’s nickname: the “Saffron Kyojin”; kyojin being Japanese for giants and reflecting the many giants from the Northern Irish legends.

For the last couple of months, Saffron has travelled around Ireland, the United Kingdom and even to places as far as New Zealand, Antarctica and the Niagara Falls. Each visit is captured in an image and the resulting photo gallery is growing every day. Just drop a line with Unit 62 and Saffron will come to visit you and your Scout group. The small token fee will contribute to the Unit’s Jamboree fund. 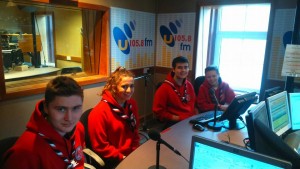 Not short of ideas on how best to communicate their story to those less familiar with Scouting and the Jamboree, Scouts from Unit 62 were recently hosted by Ivan Martin on Radio U105 in Belfast. Listen to what they had to say about their adventure, which will culminate in Japan this summer.

In May 2015, members of Unit 62 and some 350 other Scouts from across Northern Ireland gathered for another extravaganza: “Burn 24” This was a special camp with 24hour-non-stop activities! Watch this three-minute video clip to find out what happend!