(Odysseus Network/Bruges) – Every two years, Sea Scout Leaders from European National Scout Organisations (NSOs) come together for 5 days to discuss new programme and training trends, to network and to share experiences gained in the theory and practice of Sea Scouting. Eurosea12, this year’s European Sea Scout Seminar was held in Bruges in Belgium in September with some 50 participants from 11 different NSOs attending. 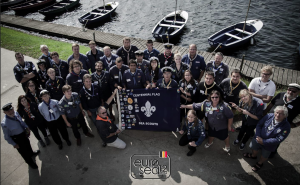 We have spoken with David Sv. and David M., both from the Czech Republic, who attended the Sea Scout meeting for the first time: “Having never attended the Eurosea Seminar before and replacing two other Czech Sea Scouts on very short notice we had no real idea what this event would be like”, explains David M., who is a Sea Scout Troop leader in his native České Budějovice. “We had only just gathered outside the beautiful home of the 11e/22e De Boekaniers FOS Open Scouting Sea Scout Group when we had a portrait photo taken”, adds David M., from Praha, who is a member of the Czech Sea Scout Leadership Team. “Later, 40 pictures built a big mosaic and everybody felt really part of a large family.” 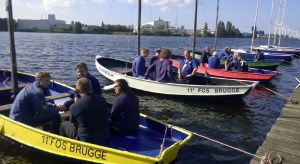 “The variety of programme elements was exhausting but great,” says David M., “a series of general presentations and updates, small group work discussing and analysing latest trends in Sea Scouting, an offer of different workshops dealing with nautical, safety on water and other practical matters, and so on. There was also plenty of space for more informal exchanges, including during the evenings: on one night each NSO presented itself and its Sea Scouting activities during an International Evening, while on another night, our Belgian hosts entertained us.” 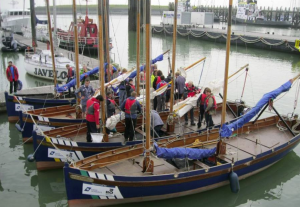 David Sv. continues: “On the next day, we were introduced to the Lelievlet and B2 Zeilsloep vessels, the two types of ships most commonly used by the Belgian Sea Scouts Group which hosted our meeting. And as the weather and wind were favourable, we split into several international crews and spent the remainder of the day out on the water. For me this was among the highlights of the event.”

The B2 and Lelievlet Zeilsloeps: traditional vessels of Belgian Sea Scouts

During the last day of the meeting, the participants accepted an offer from ZHP (Poland) to host Eurosea13, the next European Sea Scout Seminar; the event is scheduled to take place at the Perkoz Scout and Guide Centre on the shores of Lake Pluszne, near Olstyn, in September 2016. The participants also elected the six representatives of European Sea Scouting who will form the Odysseus Network Group for the next two years: Nuno Baptista Jacinto (Portugal), Ernst-Jan Jacobsen (Netherlands), Werner Strobel (Austria), Kris Bauters (Belgium), Jakub Mazurkiewicz (Poland) and Satu Raudasoja (Finland). 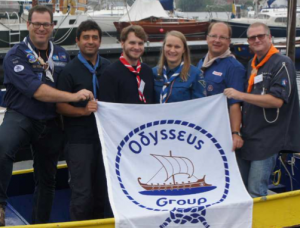 The new leadership of the Odysseus Network

To give you an idea of what kind of activities Sea Scouts are regularly involved in, here are two short video clips featuring two recent events in Ireland (both videos courtesy of 5th Wicklow (Bray) Sea Scout Group, Scouting Ireland):