(FCEG/Igualada) – Like many other Scouts and Guides across the European Region, the Venture Scouts (Pioners i Caravel·les) from Agrupament Escolta i Guia Jaume Caresmar i Maria Salvà, from Igualada, near Barcelona, have just returned from their Summer camp. But for the 26 Guides and Scouts from Catalonia the 2014 camp was a very special one: they had travelled some 2300 km north to Sweden to attend the Swedish National Jamboree “Vilda 2014” in Karups-Nygård, where they spent ten days with Scouts and Guides from Sweden and Switzerland on the shores of beautiful Lake Sövde.

What follows is an interview that appeared in the camp newsletter & website halfway through the camp and was subsequently republished on the website of Minyons Escoltes i Guies de Catalunya, one of the member associations of the Federació Catalana d’Escoltisme i Guiatge (FCEG). 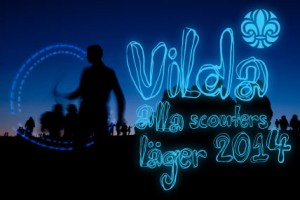 “Vilda 2014”, the Swedish National Jamboree attended by the Ventures from Igualada

Hello, where are you from?
We are 26 Ventures from Igualada near Barcelona. Altogether, we are about 250 Scouts and Guides in our local Group in Igualada.

How did you end up at “Vilda2014”?
In preparation for this summer camp, we were tasked to make four presentations about where we wanted to go and experience Scouting. We then contacted the international department of our association and discovered where National Jamborees would take place this year. Out of the options, we selected Sweden and “Vilda 2014”.

What were your experiences with the camp’s theme “will, warmth and whirl” so far around?
The sense of warmth was definitely expressed in the spirit of friendship and togetherness, which we have experienced here, like when we sit in around the campfire at night and sing songs or when we are working together in our groups. And today we also discovered the sauna, which was very exciting, as we did not know at all what to expect! Will was expressed in our willingness to learn new things. We faced a number of new challenges: for example, we had never done pioneering with lashing ropes or paddling a canoe before.

What are you looking forward to the most during the rest of your stay?
When we looked at the programme schedule the sauna and night activities sounded the most exciting but we are also looking forward to the camp fire, to meet, discover Scouting and Guiding traditions and exchange experiences with fellow Scouts and Guides from other countries. 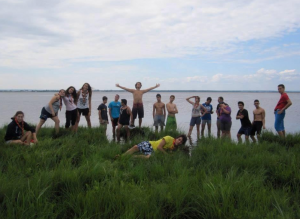 If you compare Scouting experienced at “Vilda2014” with that of your own country, what would be the main differences?

The biggest difference is probably the organisation of the camp – both in terms of building places to sleep and the focus on hygiene. We always sleep in tents rather than build big wind-shelters. We pay attention to hygiene but we do not chase our Scouts with disinfectant before every meal. In our country, our Leaders are much younger than many of those we have met in Sweden. The most common age is 20-25 while it looks as if Leaders in Sweden were often parents to scouts. We also have a few different traditions, which we have not seen here, like waiting to eat until everyone has received their food and singing a song together to wish each other a good meal.

Details about “Vilda2014”, including a series of short films, are available on the camp website.
The interview on the website of Minyons Escoltes i Guies de Catalunya.
© images: Scouterna/Vilda 2014