Sharjah 2014: An International Rover Scout Gathering in the Heat of the Arabian Desert

(SP-FS/Helsinki) – More than a hundred Rover Scouts from nearly as many different countries and National Scout Associations gathered in Sharjah, in the United Arab Emirates, in February 2014 for the 6th International Scout Gathering and spent ten days in a part of the world most of them had never visited before. One of the Rover Scouts travelling to the Arab Peninsula was Elias Herva, from Finland, who since has shared his adventures with readers of HEPPU, the magazine of the Scouts and Guides of Finland. Here is his story: 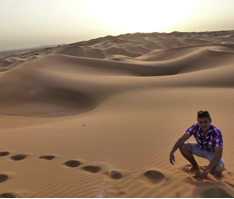 Just before Christmas last year, a notice in the international newsletter of my association, The Guides and Scouts of Finland, captured my attention. They were looking for a representative for a rover event in the Middle East. This interested me right away. And after some consideration, I decided to give it a try. And I was selected for what was to become a memorable international Scouting experience!

Once we arrived in Sharjah, the event started with a stunning opening ceremony in the presence of local and regional dignitaries all wearing their splendid local costumes, which ended in all of us hoisting the flags of our countries simultaneously. During the first few days, we were each given the opportunity to present where we were from and how (Rover) Scouting was happening in our associations. This was quite interesting, as we were some one hundred participants from almost as many different associations.

We went up (by elevator, not by stairs…) Burj Khalifa, the world’s highest building in the neighbouring emirate Dubai, and visited a number of sightseeing spots in the country. One of the next evenings we spent on the rim of the desert while the muezzin’s call to prayer chimed. Listening to these new sounds and being there with my new scout friends from all corners of the world, the atmosphere was mystical – just like in one of the 1001 Arabian Nights.

The traditional “Family Photo” – Rover Scouts from around the world

Apart from a extraordinary programme keeping us busy throughout our stay and the various local Scouting activities we joined in, the most memorable treasures I took home to Finland was the long list of new friends in the Arab Region and from all corners of the world. This event was an incredible experience of Rover Scouts coming together from all over the world and sharing a common open-mindedness, willingness to mutual helping and the clear desire to build and foster friendships regardless of cultural, linguistic and geographical borders. This is really something very cool. And I can only recommend you to hurry enlisting as a candidate when the next such gathering will happen in the Arab Scout Region or elsewhere.’

For more details and plenty more photos:
– The 6th InternationScout Gathering “Sharjah 2014” on Facebook:
– The Scouts and Guides of Finland on the web and on Facebook
– The original article appeared in HEPPU, issue 2/2014 (author: Elias Herva, translation provided by Eeva Riivari)