(CNE/Ilha de São Miguel) – She has seen a lot in her 35 years: starting her life in Sweden in the 1980s, transatlantic drug smuggling, confiscation by the state, several years of regatta yachting, loosing her mast in heavy weather, left abandoned, three long years of repairs and renovation by Sea Scouts, and finally a renaissance as Sea Scout Yacht! The incredible story of this yacht, now known as Almirante Warrington Baden-Powell, has recently been featured on 9id, a bilingual Internet platform for and by the people of the Azores in Portugal. Here is a slightly edited version of Cristina Cordeiro’s original text:

Back in 2002, following a routine control, the Portuguese police seized the yacht Siri Breeze off Flores, the smallest and western most island in the Azores. It happened that the boat was carrying illegal drugs from the Caribbean. The yacht had been built in Sweden in 1980 and measured 16 meters long and with a capacity for eight people. Now owned by the Portuguese State she was later given in custody to the Athletic Club of Rabo de Peixe. The yacht, now renamed Peix’Agulha, continued navigating the seas until an accident left her without her mast. And since the club did not have the financial capacity to carry out necessary repairs, the she was returned to the authorities. And thus, in 2010, everything went back to the start. 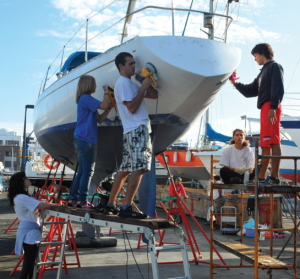 The year 2011 was already advanced when Agrupamento 1197° de Escuteiros Maritímos de São José (CNE’s The local Sea Scouts Unit 1197 of São José) in Ponta Delgada was invited by the authorities to assume the responsibility for the yacht under an agreement between the Sea Scout Group and the Judicial Police. This agreement signed, the Sea Scouts went to work: planning the repair works, reaching out to families, friends, authorities for support and initiating a campaign to collect necessary funds to ensure that the yacht was able to be put back to sea.

Three years have since passed. Now, the hull is ready, the interior and exterior woods are redone, the electrical system is renewed, the batteries are fixed, the plumbing is replaced, the kitchen, the sewage system and the engine repaired.

“We have come all this far with enormous support from the Portuguese Navy, the Regional Government of the Azores and several local companies”, says Luís Filipe Machado, Group Scout Leader, “The engine, for example, was repaired by volunteers during their free time while serving on a corvette. We are also glad that the Navy agreed to supervise the overall repairs. The knowledge and skills of the sailors have proven very valuable in this project.” 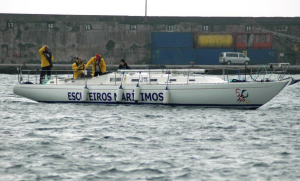 Afloat again and ready to receive her mast and rigging

But the support this exceptional project of the Sea Scouts in Ponto Algado received does not end there: “We are also grateful for the support we continue to receive from parents and relatives of the 70 Sea Scouts of our Group”, underlines Luís, “Some take care of the fridge, others look after the stove, yet others install gas and renew electric cables: each one does what she or he knows, investing their skills, time and money as volunteer partners in the project.”

With the complex repair of the yacht’s mast and rigging under way, the Sea Scouts hope to have completed the work by this coming summer. 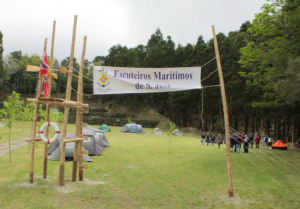 Luís Filipe Machado and his fellow Sea Scout Leaders are very proud of what has been achieved so far and are looking forward to finally start sailing the Almirante Warrington Baden-Powell, now a proud Sea Scout Yacht in her third or fourth life. And they will continue transmitting nautical skills and seamanship to young Sea Scouts in the Azores.