Undecided where to go on camp this summer? The Central European Jamboree 2014 still has openings!

(Doksy/JUNÁK) – Your Scout Group is still undecided where to pitch its tents this summer for the annual camp? Well, then this is perhaps one of the last opportunities: Junák – svaz skautů a skautek ČR, the Scouts and Guides in the Czech Republic, who are hosts of this year’s “Central European Jamboree 2014” in Doksy, in the Liberec Region of Northern Bohemia, has informed us that there are still some openings for Scout Groups from abroad. The camp is taking place from 3 to 9 August 2014. 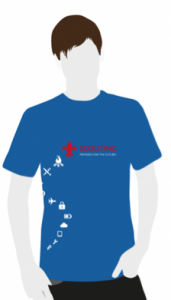 Will YOU be wearing this CEJ2014 tee-shirt this summer?

The tradition of the Central European Jamboree (CEJ) started in 1997 in Prague, when the tradition of the 1931 Jamboree of Slavonic Scouts was revived. Since then, the CEJ usually takes place every two years and each time hosted by another of the four NSOs of the Visegrád countries (CZ, HU, PL and SK). The goal of the CEJ is to strengthen the cooperation between the four NSOs and to offer a financially more acceptable option compared to events hosted on the European or world levels of the Scout Movement. But it is not only Scouts (and Guides) from Poland, Slovakia, Hungary or the Czech Republic who gather for a week of joint activities and intercultural exchange. At recent CEJs, a growing number of participants from other countries have given the CEJ a real international Scouting flavour. For example, Scouts and Guides from 17 different NSOs attended “Concordia”, the CEJ hosted in Hungary in 2010. 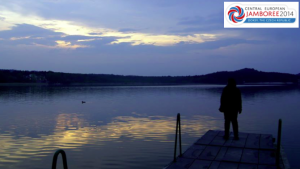 Sunset at the camp site on the shores of Lake Máchovo

The on-line registration for this year’s Central European Jamboree in the Czech republic remains open till the end of May 2014. The CEJ is a patrol camp, where patrols of ten Scouts or Guides (nine young people aged 12 to 17 and their Leader) camp together. So, what keeps you from registering your patrol(s) and planning your trip?

For more information:
– The CEJ2014 Information Leaflet
– The Central European Jamboree 2014 on the web and on Facebook