(LS/Vilnius) – The Cathedral Square and other parts of Vilnius, capital city of Lithuania, were the setting of a beautiful spring fairy tale a week ago on Saturday. Some 900 Scouts of Lietuvos skautija (LS, Lithuanian Scouting, the National Scout Organisation in Lithuania) from all corners of the country had come together to celebrate Saint George’s Day in colourful and memorable fashion and to spend the day together in a series of Scout activities.

Before the different age sections split for their day’s programmes, participants were greeted on Cathedral Square with messages from H.E. Dalia Grybauskaitė, President of Lithuania, and from H.E. Artūras Zuokas, the cities’ mayor. 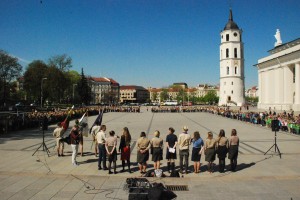 A patrol challenge kept Scouts and Ventures busy in Kalnų parkas (one of the city’s large parks) where they had to demonstrate skills and show knowledge in a variety of subjects. Interaction with children, young people and families enjoying a beautiful day in the park and old town were also part of the programme and helped to give additional visibility to the Scout Movement. Meanwhile, the Cub Packs spent their day exploring the treasurers of Vilnius, visiting the old town and various museums.

The event culminated with a concert at the band stand in Kalnų parkas, organized by Titas Motuzas, from the Kernavė Scout Group. A number of popular bands and Scout bands took part, much to the delight of the Cubs, Scouts, Ventures, their Leaders and the general public. 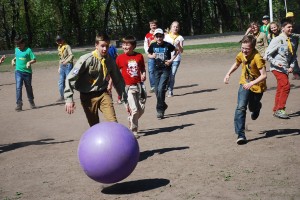 After a long day and exhausted from the different activities, Teodora, from Kernavė Scout Group, said she had most liked the final concert performance in Kalnų parkas. And Rapolas, from Skaistis Scout Group, who attended the event for the first time, said “I enjoyed meeting my friends and spent time with them competing with Scouts from many other Groups from all parts of Lithuania. It was quite impressive to see nearly thousand gathered on Cathedral Square.”

Thanks to the beautiful weather, interesting programme and joyful evening dances we have found a lot of new friends from other regions and together told the most beautiful spring fairy tale for Vilnius!