(Tá Gasóga Mara Mhullach Íde/Scouting Ireland) – Rowing aficionados have their annual Boat Race (for all but the 16 rowers from the Universities of Cambridge and Oxford only an affair to watch) on the River Thames. But the real sports man or girl is not satisfied with watching. It’s being on the water oneself that counts, and if one can combine the effort with fund raising for a good purpose, it is even better.

That is what Alan and Tiarnán, two Sea Scout Leaders from Malahide Sea Scouts, in Dublin, Ireland, must have had in their minds when they decided to compete in this year’s Devizes To Westminster International Canoe Marathon.

The Race Course: 125miles downriver from Devizes to Westminster

A quick look on your map will tell you: that’s far from being like a pleasant Sunday afternoon on the Serpentine. No. This is a real marathon race, with mostly tandem teams paddling some 200km downriver on the Thames, from Devizes, in the County of Wiltshire, all the way to Westminster Bridge in the heart of London.

This year’s race was held on the Easter weekend 2014. A large support team and a van-full of equipment had accompanied Alan and Tiarnán across the Irish Sea to their temporary headquarters in Reading. With the two Sea Scout Leaders having more than six months of tireless training out of and on the water behind them. 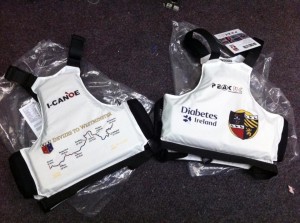 Some essential kit for the race

“This is really the ultimate endurance test”, agrees Alan, “125 miles (some 200km) of gruelling waterways to negotiate, including uncountable locks and weirs (which make it necessary to get out of the water and back in a few minutes later, having carried boat and gear past the obstacle), typical foolish April weather, the dark hours of a long and cold spring night, tricky effects of high and low tide, and surprise encounters with all kinds of creatures of wildlife.”

“To top it off”, says Tiarnán, “the race is normally for a tandem canoe. So teamwork is critical to avoid capsizing in freezing waters and rough currents. And more than 20 hours of non-stop paddling must not be underestimated, even with the odd technical halts every now and then!” 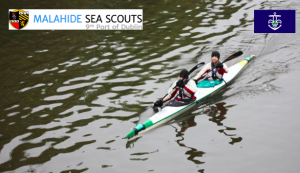 Alan and Tiarnán in action

Novices of the sport know that canoeing is not so easy as it looks when watching from the riverbank. But in darkness on a river amidst some 200 hundred competing teams? No wonder, about a third of the teams drop out before reaching the finishing line.

By the way: the origins of the race go back to the late 1940s, when Rover Scouts from the local 1st Devizes Scout Group would aim to complete the distance in less than 100 hours in home built double kayaks. The first “race” took place at Easter 1948, with Brian, Peter, Laurie and Brian, all not yet 18 years old, and the nature of their effort was such, that progress reports made it to national press. And they beat the goal by finishing in just under 90 hours! 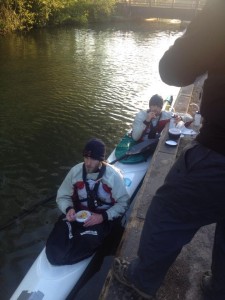 Another challenge was added in the 1980s when competitors were formally encouraged to raise funds for charities by being sponsored to complete the race. Since then, every year many thousands of pounds are collected. And the team raising the largest amount is awarded a special trophy for their efforts!

And Alan and Tiarnán? Well, it appears that they sat together on a mild St. Patrick’s Day last year when they made the decision to compete, as they recall: “It was on that evening back in March 2013 that we had the enlightened idea of attempting the ‘Devizes to Westminster’, this legendary canoe/kayak race with a reputation for being the world’s toughest. We were inspired by two of our former Leaders from Malahide Seas Scouts, Andy and Paul, who had completed the same race a decade previously (finishing 12th out of 52 teams). And the advice we have received from these guys, as well as members of their support crews has been invaluable!” 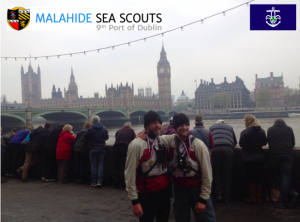 And it is not just the endurance challenge that motivated the canoe tandem from Dublin: “As is customary with this race, we had also chosen to help raise funds for two particular charities”, explains Alan, “and we are very happy that we reached close to 60% of our target, collecting just under EUR 3 000 for Diabetes Ireland (to help continued research and support of 200 000 people suffering from diabetes in our country) and for our own Sea Scout Group in Malahide, where funds for repairs and redevelopment of current facilities are always welcome so that we can continue contribute to the development of children and young people in our community.”

Robert, Group Scout Leader of the 540 member-strong Malahide Sea Scouts, remembers the months prior to the big race: “Over the many months that Alan and Tiarnán were training for this event, they showed all of our Group that hard work and total persistence pays off. They are true leaders in our Group, as they have demonstrated more than once and lead by simply doing and this is true leadership in life and in Scouting!”

“And, as the Irish playwright George Bernard Shaw once said: ‘Life isn’t about finding yourself. Life’s about creating yourself’”, concludes Robert, “and this is what Alan and Tiarnán have done in their Scouting journey to date.”

We can only join Robert and the large family that is the Malahide Sea Scouts – 9th Port of Dublin and congratulate Alan and Tiarnán for what they have achieved: “Tá Gasóga Mara Mhullach Íde an-bhródúil as duit agus do bhaint amach iontach!” (*)

For more details:
– Malahide Sea Scouts, 9th Port of Dublin (Scouting Ireland) on the web and on Facebook;
– Sea Scouting Ireland on Facebook;
– Alan & Tiarnán on Facebook and on their charity donation page;
– The Devizes to Westminster International Canoe Marathon on the web.
– To find out more about the race’s history you may wish to read Brian Greenaway’s book “The Devizes to Westminster Canoe Race” which explains the origins and evolution of the race over the last 65 years.