(ZHP/Warsaw) – Every four years delegates from all over Poland gather at the National Congress of Związek Harcerstwa Polskiego (ZHP, the National Scout Organisation in Poland) in order to decide about the most important issues concerning their association. This year’s Congress took place in Warsaw, the country’s capital city at the beginning of December. And for the first time all parts of it were live broadcast by ZHP’s own professional TV station ZHP360!

“At our National Congress”, explains Rafal Bednarczyk, International Commissioner of ZHP, “we always summarise things that have been done until then, we discuss the key problems currently faced, and the delegates choose the direction our Movement should follow in the coming years. The national leadership is elected and awards of recognitions presented to individuals for their services to Scouting and Guiding in Poland.”

“The significance of the ZHP National Congress is undeniable and it is clear that every Scout and Guide Leader should be familiar with what actually happens and what is decided for the future of our Movement as a whole, but also for the individual Leaders and their local Groups and Units,” underlines Dominika Proszowska, from ZHP’s TV station ZHP360. “You know, the 21st century gives us opportunities we could never have imagined before. Today, there are many new and absolutely astonishing tools available to us helping to improve our work with children and young people and to prepare them better for the challenges of modern life. These new opportunities allow us to keep our Leaders well informed at all times and they help establish a recognised professional Scout brand that, in turn, will make our whole Movement more reliable in the eyes of our current and potential future partners.”

And that is exactly the reason behind ZHP360, the recently created first professional TV Station run by the Polish Scouts and Guides. 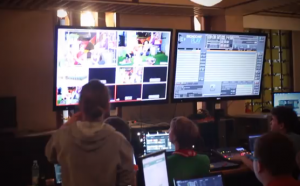 Dominika Proszowska remembers the beginnings: “This was really an ambitious – if not crazy – idea! A project with over 50 young people from all corners of Poland: most of them had never met before, and the majority of them had never seen a TV camera let alone a TV studio from the inside. Many had never written a tweet. And many had no particular idea of what the ZHP National Congress was.”

“Time was very short”, she recalls, “We all met in Warsaw only one day before the delegates where due to arrive. And this was the beginning of a real Scout miracle! During the four days that followed, the TV-Team worked as if we had never done anything else in our lives: setting cameras, adjusting microphones, shooting, cutting and supervising the quality of the broadcast, to name just a few of the aspects.”

“Each day, we started with a breakfast show at 8am, just like the real professionals from the Polish National TV, and for two hours our own cheerful ‘anchor girls’ made sure the audience was well informed with background stories about a variety of topics concerning ZHP. Later during the day, the live broadcast from the plenary hall began, which also included interviews with key Leaders and guests. And the programme continued throughout the day until 10pm. The busy days ended with a team meeting before everybody fell into their beds at midnight for a couple of hours of sleep.” A total of 70 hours of material were the results of the combined efforts and you can still watch them on the ZHP360’s website.

But the TV-Team was not just in charge of running the studio and organising the broadcasting of the event, says Dominika Proszowska: “Once every hour we issued a very short news update which allowed people who could not watch the live streaming to catch up. There was also a group of people monitoring closely the proceedings of the Congress and putting together essential information, which was instantly used to create posts for our different social media channels.” 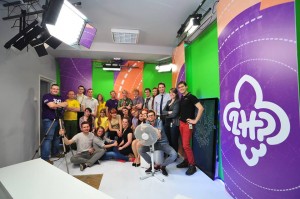 “And those of us who coordinated the media team made sure that a coherent message and picture went out to the Scouts, Guides, Leaders and other interested people following the event across the country. According to statistical data, we reached more than 77000 people during the four days and some 25000 followed the live broadcast.”

So, what are the conclusions looking back on these very busy and challenging days in Warsaw?

“We slept very little and worked very hard but I can say with a confidence that we definitely did a great job and achieved our goal”, concludes Dominika Proszowska, “And this confidence is not only based on hundreds of positive feedback received on our different social media channels, but also on encouraging reports in a number of non-Scout/non-Guide newspapers and TV stations. This adds to our satisfaction and also motivates us to continue this work in the future.”

“We are immensely proud”, adds Rafal Bednarczyk, “This project was a huge success, both within our Movement but also outside! And don’t forget: the average age of the members of ZHP360 is 18. And there was only one person in the whole team with professional experience in TV production! Indeed a miracle. So true for many things Scouting and Guiding can achieve!”

– ZHP360 broadcasting from the 38th National Congress: on the web
– ZHP on the web and on Facebook
– A short video clip about ZHP360: