Are you ready? The permanent on-line Jamboree is open: check scout.org now!

(WSBERO/Geneva) – This morning, this afternoon or tonight, depending in which part of the globe you are living, the official web presence of the World Orgnization of the Scout Movement (WOSM) on scout.org changed. It was not just one of those regular updates introducing new design elements, yet more sub-sites or additional languages. No. The new scout.org is a new page altogether.

“For the last ten months we have been reviewing and analysing feedback from our readers, which resulted in the developing of an innovative concept for our Movement’s web presence”, recalls Srinath Tirumale, from WOSM’s World Scout Bureau in Geneva, who co-leads the core team responsible for this relaunch, “and today, a radically new website saw the day”.

The changes are manifold, but most remarkable is the ambition to encourage each and every Scout around the world to actively contribute content to the site, as Srinath explains:

“A user-generated interface is at the centre of the new scout.org, with members of our Movement from all levels – local, regional and global, as well as volunteers and staff – providing stories, images, videos or any other piece of communication they want to share with others. Just like at a real World Scout Jamboree. But potentially with some 40 million participating Scouts, instead with only some 40000 lucky ones attending the Jamboree in Sweden in 2011.” 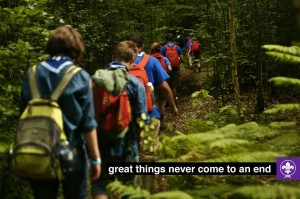 Are you ready? The permanent on-line Jamboree is open: check scout.org now!

This sounds really interesting, Srinath. But how will this innovative concept work in reality?

“We are offering open, easily accessible on-line space 24 hours per day, seven days per week and 365 days per year. Our national Member Organisations and their youth members can showcase the richness of diversity our Scout Movement is known for. Stories of past activities, current projects and future events can be shared by Scouts directly involved: everyone is a user and everyone is a contributor, everyone can reach out to 40 million other Scouts around the world !”

Another new feature of scout.org is the “intranet”: it is in this space that WOSM’s Member Organisations (the National Scout Organisations and National Scout Associations), key volunteers, staff at the World Scout Bureau, as well as other authorised users will access information relevant to the day-to-day business of the Movement. This may include important announcements, resources, regular circulars or other items linked to the core services offered to members of WOSM.

And of course, and by no means least important, relevant content contained in the previous scout.org will remain available and continue to be an important source of information for readers not yet familiar with the Scout Movement. Only in a more accessible and more coherent form, as Srinath points out:

“The corporate section of the new scout.org – called “About Scouting” – provides a wide array of information about our Movement, its World Scout Bureau and the currently 162 national Member Organisations around the world. We have tried to keep a flat structure with important details only three or four clicks away from the main website. This part of scout.org remains a valuable and important tool to reach out to potential new partners and the general public.”

To make this vision of a permanent on-line Jamboree come reality a team of staff and volunteers from the six regions of WOSM and the seven office of the World Scout Bureau, most ably support by external consultants, has been planning and developing hard over the past months. But not only for them 15 October 2013 is an important day. Maybe it will once be remembered like 1 August or 22 February?

It is now up to us – you, your friends and me – to fill it with life and use the new tools to their full potentials!

The new scout.org (which went public on 15 October 2013)
Circular 25/2013 to NSOs (which introduces the concept of the new scout.org)
WOSM on Facebook