(AEP/Lisbon) – Two major events marked the centenary of the Associação dos Escoteiros de Portugal (AEP), one of the two National Scout Associations in Portugal, earlier this month: a big birthday party with thousands of participants from all AEP Scout Groups at Jamor National Stadium in Oeiras and a ceremony at the Presidential Palace in Lisbon.

The first event was a typical Scout Rally: under the title “Escotismo para Todos – Desafiando Diferenças” (Scouting for all – challenging differences) Cubs, Scouts, Ventures and Rovers and their adult Leaders from all corners of Portugal came together for two days packed with a wide variety of Scout activities to celebrate the hundredth birthday of their association.

“It was really great fun. We had many competitions with Patrols from other Scout Groups and were able to try out a number of exciting individual and group activities. And all this on the grounds of the famous football stadium, where the Cup Finals take place every year!”, said one of the young Scouts. And it was a magic moment to see the sea of flags of the different Scout Groups during the brief ceremony when the family photo was taken.

A few days later, representatives of the three oldest Scout Groups of AEP, Grupo 1 (Lisbon), Grupo 2 (Lisbon) and Grupo 7 (Lisbon), who were founding members of AEP and had all celebrated their centenary this year as well, accompanied the Leadership of their association to Palácio Nacional de Belém, where they were received by His Excellency, Prof. Aníbal António Cavaco Silva, President of the Republic of Portugal. Veerle ‘Chip’ Haverhals, recently elected member of the European Scout Committee, joined them and represented the European Region of WOSM at this ceremony.

The President had decided to appoint the Associação dos Escoteiros de Portugal a honorary member of the Ordem de Mérito de Instrução Pública, one of the republic’s highest distinctions. It was with a particular satisfaction that he welcomed Scouts to the palace to celebrate the centenary of AEP.

“A centenary is a very special occasion which merits to be marked properly and I welcome you all here at the palace and also greet all those who have helped carry out the activities in the past and present and have contributed to creating what is known today as Associação dos Escoteiros de Portugal”, the President said in his remarks, “Your association is the oldest youth organisation in Portugal, active all over the country, on the continent and in the autonomous regions, and for more than 100 years has played an important role in the education of our children and young people, not replacing but complementing education in the families and at school. Through the method of non-formal education, you have contributed to the acquisition by tens of thousands of young Portuguese of skills and competencies relevant in various contexts of their adult life.” 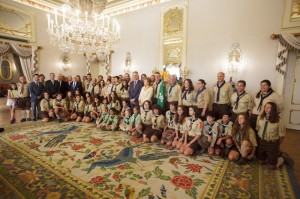 The President also highlighted the values of the Scout Movement, which guided the Associação dos Escoteiros de Portugal in promoting environmental education and conservation of nature, outdoor activities, peace education, healthy lifestyle and sport. All these activities continued to stimulate the engagement of Portugal’s young people in their social environment, thus contributing to the full development of their personalities.

“Your Association plays an important role in the National Youth Council of Portugal and is actively engaged in the youth policy debate in our country”, he continued, “thus contributing to the development of democratic citizenship and helping prepare our young people to play an active role in Portuguese society.”

“And for all this”, the President concluded, “and also because I want to associate myself with the centenary of your association and publicly recognise its contribution over one hundred years to the development of the Portuguese society and the construction of our country, I have decided to appoint the Associação dos Escoteiros de Portugal a honorary member of our Ordem de Mérito de Instrução Pública. It is with my greatest pleasure that I decorate your flag with the insignia.” 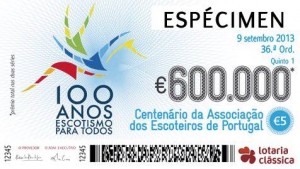 Over the last couple of weeks, the jubilee celebrations were accompanied by a nationwide marketing campaign: a special postcard & stamp available throughout Portugal, a centenary lottery, and a series of 15 different small bags of sugar, all of which will help to reach out to new members as well as attract friends of Scouting in Portugal and around the world.

For more information, please refer to the following links:
– The Medal Ceremony at the Presidential Palace in Lisbon
– Associação dos Escoteiros de Portugal (AEP) on the web and on Facebook
– AEP’s first one hundred years in three minutes
– A TV interview with AEP’s Chief Scout José Araujo
– Press coverage in Diário de Notícias, one of Portugal’s leading newspapers