(Peel-Purt ny h-Inshey, Ellan Vannin/The Scout Association) – Saturday, 11 May 2013, Peel Hill, Isle of Man: Hundreds of Scouts of all ages and from all Groups in the Island patiently waiting for the big moment. Then: roaring sounds accompanying a black helicopter closing in and gently touching the ground. A scene not different from the rare occasions when Her Majesty, The Lord of Mann, would visit Ellan Vannin, as the locals call the Isle of Man, the island situated halfway between the islands of Ireland and Great Britain in the Irish Sea. 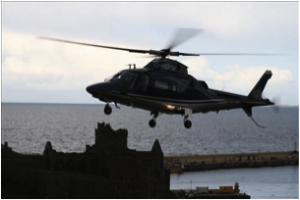 Bear’s helicopter approaching Peel Hill on the Isle of Man

In fact, it was Bear Grylls, Chief Scout of The Scout Association of the United Kingdom, and well-known adventurer, explorer and survival expert, who disembarked to be cheered by the crowd. The visit was part of his weekend tour of Scouts in the Northwest of Great Britain. 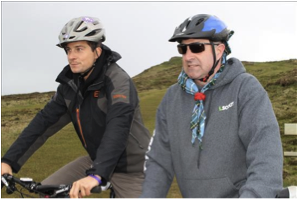 “What a fantastic, beautiful place,” was his reaction as he was met by Peter Young, Island Commissioner, who invited him to take part in a number of activities prepared by Manx Scouts in the framework of this year’s Scouts Activity Day. After racing down the hill on a mountain bike accompanied by Explorer Scouts, Bear spoke with young members of all Sections and their Leaders as they enjoyed such activities as sea kayaking, coasteering, cliff climbing and sand castle building. 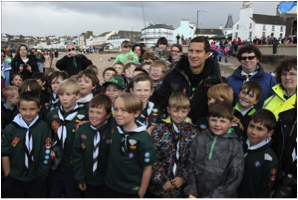 “I know there’s an incredible Scouting community over here,” the Chief Scout later commented, “And I am honoured to see so many Scouts turn up in spite of the rather unstable weather conditions.” Peter Young, the Island Commissioner, returned the compliments, adding: “It’s good to see so many of our 830 members gather and share their enthusiasm and commitment with Bear Grylls. And the public attention of people just wanting to get a glimpse of the famous TV adventurer will certainly further boost our membership which has seen growth over the past years.” 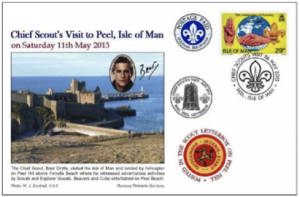 Waving from the doors of the helicopter, Bear Grylls bid farewell to many new friends: “It is really a shame that I have to go on and could only enjoy your hospitality for a couple of hours. Thank you all for the generous welcome!”

For further information:
The Scout Association of the Isle of Man on the Internet and on Facebook