“Flame of Hope” meets the “Peace Light” in Hamburg

(VCP/Hamburg) – The German Protestant Church Day (Deutscher Evangelischer Kirchentag) in Hamburg was the background for a very special meeting this week: Protestant Scouts and Guides from the Verband Christlicher Pfadfinder und Pfadfinderinnen (VCP, one of the National Scout Associations in Germany) came together with Muslim members of the Bund Moslemischer Pfadfinder und Pfadfinderinnen in Deutschland (BMPPD) for an interreligious ceremony during which the Christian “Peace Light” met the Muslim “Flame of Hope”. 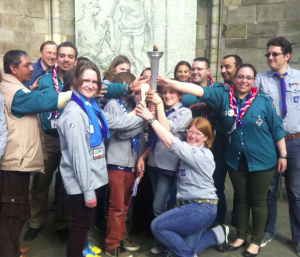 “Encounters in openness and friendship between religions are part of the Kirchentag as well as of the Scout Movement”, explains Diane Tempel, from VCP, “there are some 40 million Scouts and Guides around the world and most of them are members of one or another religious movement. They may have different beliefs but they regularly meet in spite of such differences.” And Fouad Hartit, from BMPPD, adds: “Living together peacefully in our homes, communities, countries and around the world are common coals of different associations within the Scout Movement. As Robert Baden-Powell said: we all want to leave this world a little better than we found it.” 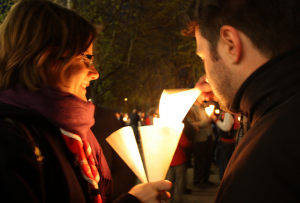 The “Peace Light” bringing warmth to everybody

Each December, the “Peace Light” from Bethlehem is carried by Guides and Scouts to all corners of Germany (and indeed to other cities, villages and homes across Europe and beyond. “The “Peace Light” ceremonies have become a highlight for many local groups”, says Diane, “and we have contributed to spreading a message of peace and brought some warmth to many households.” 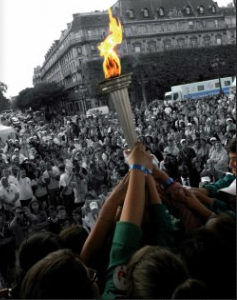 The “Flame of Hope” carried through German cities in 2013

Carried by a former Olympic torch, the “Flame of Hope” has been travelling through Europe for more than two years now. Initiated in autumn 2011 by members of “Scouts musulmans de France” (one of the National Scout Associations in France), the “Flame of Hope” was recently brought to Germany. “The “Flame of Hope” is a welcome symbol helping our young citizens to better understand our country’s recent history,” explains Fouad “we hope that its warmth and brightness will help eliminate prejudices and barriers across our society. We all want to live together in peace and harmony, respecting our cultural and religious differences. That’s what flame and hope stand for.” Accompanied by young members of BMPPD, the flame will continue to travel trough Germany and is expected to reach Berlin on 3 October 2013, when a “Flame of Hope Charta” will also be presented.

Make sure not to forget to light your own candle with the “Peace Light” when it will again be brought to your neighbourhood in December 2013. And why not join one of the “Flame of Hope” ceremonies between now and October?