The Association of Scouts of Azerbaijan invites scouts and rovers to the International Camp “Wonderland 2013” held in Sheki region, North-West of Azerbaijan Republic among the Great Caucasus mountains on 16-23 August 2013.

Sheki is one of the most beautiful cities of Azerbaijan. It is located in the chain of the Great Caucasus Mountains. Sheki was the capital of Sheki Khanate and the center of silk production. As it was located on the crossroad of the silk way it has many architectural sights of the medieval ages. During the I-III centuries north Azerbaijan was called Albania and the main religion was Christianity. The participants of Wonderland 2013 will be able to visit the ancient churches of the I – III centuries as well as the mosques of the XV – XVI centuries. The camp site is located between the mountains and forests on the bank of the river. The climate is moderate.

The camp will consist of two parts:

The Association of Scouts of Azerbaijan will provide tents during the camp and hiking.

Main activities during the Camp are going to be pioneering, first aid, activities on river, orienteering, horseriding, climbing, hiking to the medieval fortress, sport games, “Wonders of Sheki” – city tour and many other activities.

Home Hospitality is available upon request after the event as well as sightseeing in Baku, swimming in the Caspian Sea and be familiar with delicious Azerbaijani cuisine.

Fee that include internal transportation, t-shirts, badge, meals during the event is 50 euros!

NOTE: Those who would like to take a part in the hiking to Shahdag in the National Park shall pay additional 50 Euros (state fee). 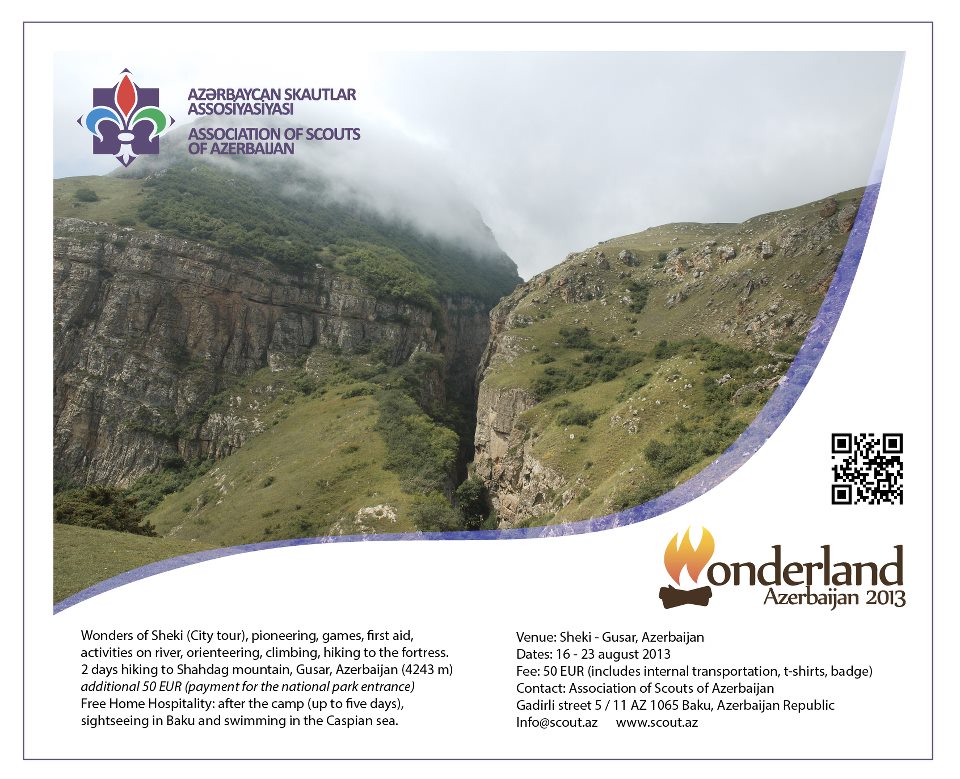