(SCOUTS New Zealand/Te Anau, Auckland) – Asher, Connor and William will remember this for the rest of their lives and will surely be asked to tell the story again and again when they will sit around the camp fire with their fellow Scouts from Te Anau Scout Group in South Island, New Zealand.

That’s because they actually met Bear. Not Baloo or one of his species. No, they had in fact been part of the set for the latest in-flight safety video prepared by Air New Zealand featuring Bear Grylls, the current Chief Scout in the United Kingdom and renown outdoor adventurer and survival expert. 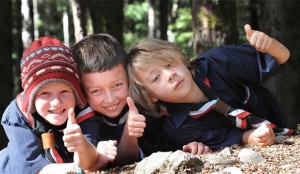 Asha, Connor and William from the Te Anau Scout Group (South Island, NZ) relaxing after the shooting of the video

Asher vividly remembers the fun and exciting moments he and his friends had on the set: “It was very funny and I know that Connor, William and were very lucky to have passed the casting for this film.” And William adds: “We all knew Bear from his TV shows but meeting him here in our country is quite different. Although I still hesitate eating and drinking all of some of the things Bear advocates to survive in wilderness.” Connor is also proud to be part of this film: “While it’s not on the film, we were able to show Bear some of our own survival skills acquired in our Scout Group in Te Anau. And I am very glad that we have earned some funds to help rebuild our den!”

“As soon as it became known that Air New Zealand had approached the UK’s Chief Scout Bear Grylls to do their newest in-flight safety film, we started to make sure the Scouts would be part”, recalls Niamh Lawless, Scouts New Zealand’s Chief Executive. 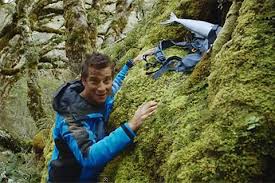 On the set: UK Chief Scout Bear Grylls storing his bag in the overhead compartment

And it really proofed to be an ultimate adventure experience for Asher, Connor and William, who can be proud of the result: nearly five minutes of action set in the background of the beautiful scenery of the Routeburn Track in Fiordland (South Island) and spiced with plenty of fun and humour.

Niamh Lawless explains her association’s motives to get involved: “The whole Scout Movement in New Zealand will be sharing the excitement of this activity. SCOUTS New Zealand is all about young people testing and pushing themselves to try new and exciting things in a safe and supervised environment. The opportunity to be part of the filming of this new safety video of Air New Zealand, which has a great focus on adventure, safety and conservation, is a perfect parallel to much of what we do every day in our Scout Movement”. 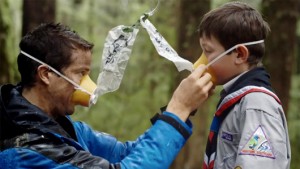 On the set: Bear Grylls and Connor adjusting their oxygen masks

The video was released on 27 February 2013 and is now used on all flights operated by Air New Zealand. Michael Tod, from Air New Zealand, explains: “Bear was the ideal partner to help us bring to life important on-board safety messages in a unique and compelling way, while at the same time demonstrating the best of what New Zealand has to offer. We hope the global attention this safety video will receive generates more awareness of our amazing country”.

And it may very well convince many a boy or girl across New Zealand or elsewhere to join the largest global youth organisation: the Scout Movement!