The European Region’s Agora 2013 will be “Reaching Out”

(WSBERO/Maynooth, Geneva) – ‘Freezing cold but still no snow’. That sums up the Agora 2013 Planning Team Meeting that was held this weekend in Maynooth, County Kildare, Ireland. However, despite the lack of snow, the weekend was very productive. The Planning Team, consisting of Ciara Beatty (IE), Xavier de Sousa (PT), Nandesh Patel (UK) and Máire Fitzgerald (IE), were meeting in advance of the European Region’s Agora which will be held at Kandersteg International Scout Centre, in Siwtzerland, from the 10 to 14 April 2013.

An Agora is an educational tool that uses the Scout Method to reach the educational objectives for the Rover age section and that has a special emphasis on Youth Empowerment. What makes an Agora so special is that it is an event run “for Rovers by Rovers”. As a result, the event looks at issues that are of importance and relevant to young people in our society today. 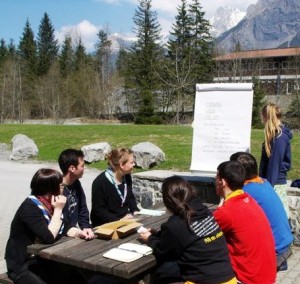 A workshop at last year’s Agora in Kandersteg

The theme for this year’s Agora is ‘Reaching Out’, focussing on Youth Participation and this is reflected in the programme which was compiled this weekend. This meeting was preceded by confirmation of funding from the Education, Audio-visual and Culture Executive Agency of the European Union. The relevant documentation has been sent to all National Scout Associations in the Region.

– The official Agora website with all relevant details as well as pictures, videos and blogs
– The Agora 2013 facebook page with regular updates, images and comments