(Strasbourg, Genève/WSBERO) – More than 150 young people from 50 – mainly European – countries attended a Youth Assembly on Democracy organised by the Council of Europe earlier this month in Strasbourg, France. It was a pre-meeting held in preparation of the World Forum for Democracy. Young Scout Leaders from Austria, Luxembourg and France  were among the young people participating. Here are their impressions:

An important aspect of the meeting was the sharing of experiences, views and visions regarding different aspects of democracy, including questions related to the access to social rights, the role of new media, religious diversity, and the inclusion of minorities. And through doing this in plenary and smaller groups, a network of young, motivated citizens was created, with its members willing to further share and develop their practices in living democracy. 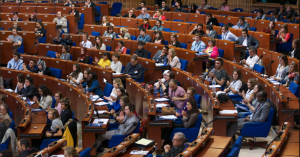 Delegates at the Youth Assembly in Strasbourg

The young delegates split into a range of different thematic working groups where they developed and discussed a series of recommendations, which addressed aspects considered to be of relevance to young people by their peers: To provide teachers with more and appropriate non-formal education tools in order to better develop pupils’ critical thinking and to seek to achieve equal representation of young people and adults in decision-making bodies in schools, as a means to contribute preparing young people to be able to fully participate in political life. 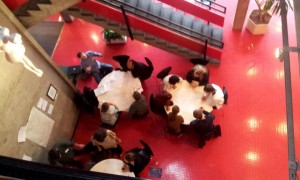 It was also foreseen to table the recommendations at the World Forum of Democracy in the presence of Nobel Peace laureate Tawakkol Karman from Yemen, Ali Fezat, political caricaturist from Syria, and UN Secretary General Ban Ki-Moon. Regrettably and in spite of numerous contributions from specialists in the filed of democracy, the World Forum accorded only a very small number of places to young people, when the delegates discussed matters relevant to civil society.

Looking back on the event, Scout Leaders Sébastien (FR), Martin (AT) and Charles (LU) believe that “the experiences emerging from the Youth Assembly and the World Forum reinforce the conviction that democratic practices and the teaching of active participation are concrete means of involving ALL citizens in the process of decision-making. And we as Scouts know both theory and practice of (youth) participation in different levels of decision-making. We have more than a hundred years of experience in this.”