(Ljubljana & Ajdovščina/ZTS) –  The educational efforts of Zveza tabornikov Slovenije (ZTS), the National Scout Organisation in Slovenia, and their impact on its (former) members’ professional careers were the focus of an article recently published in the country’s leading newspaper “Delo”. 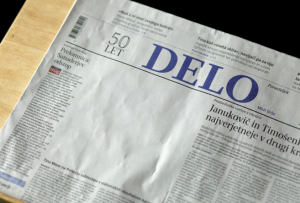 The article featured an interview with Tadej Beočanin, ZTS’ National Commissioner, who was asked how Scouting contributed to a person’s professional career development: “As a Scout you gain competences such as leadership, team work and performing. You develop creativity, adaptability and entrepreneurship. It is about gaining lifelong competences, which are very welcome later in life, not just professionally but also more generally.”

Tadej had joined Scouting 23 years ago when he was a 7-year-old boy and attended his first meeting at the Scout Group “Rod Mladi Bori” in Ajdovščina. The family had just moved into a new town and his parents had the idea that joining the local Scout Group could help their son to strengthen his social inclusion into the new environment.

“Joining the Scout Movement helped me gaining new friends and broadening my social circle. Till the end of primary school I was ‘just’ a regular member. Later on, I started taking over additional responsibilities on all levels of our organisation. In primary school Scouting meant to me socializing and usefully spennding my free time, but it soon grew into my way of life.” 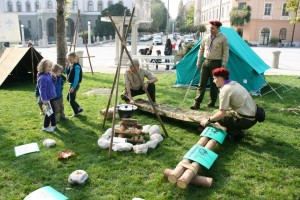 To show and to be seen: a Scout Camp in the city park

“As a member you gradually gain new knowledge, every year you learn more. By the end of primary school you know how to cook, how to make a fire, how to build a shelter, and how to do constructions with wood and ropes and many more things. But apart from such practical skills, we should not forget educational competences, which are also acquired. Throughout the years you develop a set of values and you take on more responsibilities within the Group. As the young Scouts get older, the role of their Leader shifts, with a lot of responsibilities shared by the young members. And the Leaders receive a mandatory training, which enables them to take up responsible leadership tasks within their local Group as well as coordinating roles on regional or national level. We also offer specialised trainings for additional skills in a wide range of subjects, including project management, health and safety, legal issues and financial administration”. 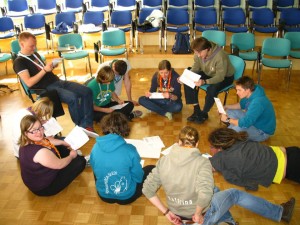 Tadej’s Scout Group in Ajdovščina celebrates its 70th anniversary this year. The Group has seized this opportunity to demonstrate that Scouting is not only about spending quality time together, but that it has also an educational aim: helping younge people to become active and responsible citizens. To find out how Scouting had impacted on their lives, the Group had interviewed a number of its former members, many of whom are today in leading positions in companies and organisations. “We were able to show how skills and competences acquired in Scouting can be useful in one’s professional career”.

A few years ago, Scouting wasn’t that popular in Slovenia. But recent efforts by ZTS to raise awareness on the role Scouting can have in the development of young people have resulted in many local Scout Groups having to open waiting lists.

Read the original version of the article in Slovenija’s leading newspaper “Delo”.
Discover more details about ZTS and Scouting in Slovenia on the web or on facebook.