Scouts from Fife and Iwate Renew Their Friendship After Tsunami Disaster

(Cairneyhill/TSA Scotland) – The friendship between the 83rd Cairneyhill Scout Group from Dumferline in Fife, Scotland, with the Scouts from the Iwate Scout Council in Japan goes back twenty years, when Callum Farquar, current Leader of the Explorer Unit, first took Scottish Scouts to Iwate. Regular contacts and exchanges have continued ever since, and many have enjoyed the wonderful hospitality in the coastal villages in Japan. 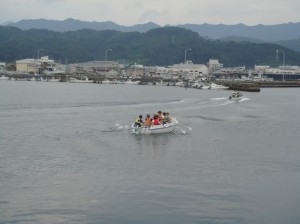 Off the Iwade Coast in August 2010

And then came 11 March 2011: a terrible earthquake off the west coast of Japan, a devastating tsunami, with worst dreams becoming reality within seconds, destroying uncountable houses, homes and workplaces of tens of thousands of people, and killing everything on its way, leaving chaos and horror images… and leaving Scouts in Fife speechless and worried for their friends in Japan.

Like many others around the world, the Scouts from Cairneyhill thought how best they could support the disaster stricken province and having good friends in the area was extra motivation. And quickly they decided to concentrate all their efforts in order for a group of Japanese Scouts to join them at this year’s International Patrol Jamborette at Blair Atholl in Scotland.

And proud and happy they were, when Keiko, Mizuki, and their fellow Scouts from Otsuchi in the Iwate Region walked up to their campsite to pitch their tents. “It was difficult to see who was more emotional”, recalls Callum Farquar, “our own lads realising that their fundraising efforts had paid off, or the boys and girls from Japan, tired but happy and smiling after such a long journey.” 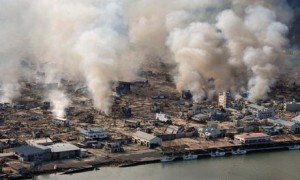 The town of Otsuchi used to be home of 15000 people and was among the worst hit towns, suffering 800 deaths with another 450 still declared missing. Keiko recalls the worst moments of her young life: “I was at school when it happened. My mum and my brother were at home with my grandmother. And my dad was out at sea on his fishing boat. It was terrible. I had no idea whether I would ever see my family again.” But Keiko was lucky. Her mother had had time to leave their home and move to relatives in more secure areas, while ten days later the family was complete again with the father joining them at the overcrowded school hall to which inhabitants had been taken. “To see my family again was incredible. We had lost our house, but I still have my parents, so I felt so, so lucky”, says Keiko. 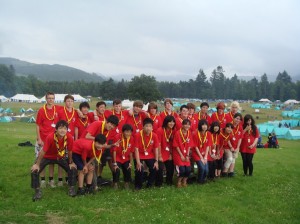 Scouts from Iwate and Fife at Blair Atholl this Summer

And Callum adds: “We are really privileged to be in a position to help the Scouts from Japan and know that our contribution is just a small demonstration of the worldwide family and support Scouting can offer. The Jamborette at Blair Atholl is such a unique and enriching experience for participating Scouts and the Adult Volunteers who make it possible. The spirit of international friendship and profound cultural exchange that takes place amongst the Scouts and Volunteers is inspiring to see. Of course, this year, our camp at Blair Atholl was particularly poignant for us as we were able to welcome our friends from the Iwate Region who had so bravely endured a devastating natural disaster.”

Over a year the Beavers, Cubs, Scouts and the Explorer Unit of 83rd Cairneyhill Scout Group raised money: the amount collected was used to contribute to the travel funds enabling their friends from Japan to travel half the globe and all the way to Scotland. And a substantial sum was handed over to take home and re-equip Scout Groups in their region.

Makoto Uchimiya, from the Iwate Prefecture, praised the efforts and tokens of friendship demonstrated by the Scouts from Scotland: “We are so grateful for your support for the Scouts in the Iwate Coastal Region. Your contribution will allow us to reinforce our programme development initiative in that area. We are organising open air activities for the children and young people and run Scout activities with them, which is very popular with the kids.”

And the story does not end there and then, as Callum reports: “We have started to collect funds which will allow our Explorer Unit to travel to Japan in Summer 2013. And they hope to visit the coastal villages of Iwate to see for themselves the effects of the tsunami and what the money they had raised has been used for.”

The 83rd Cairneyhill Scout Group on the web