Sharing Knowledge and Experiences in Consultancy Support: the WOSM Skills Workshop in Manila

This is the first time that the World Scout Bureau runs this type of workshop and the Asia-Pacific Region has taken the initiative to plan and host this event, with key volunteers and staff from five Regions as well as from the Central Office. Participants from NSOs in Australia, Indonesia, the Philippines and Singapore as well as several European NSOs also attend. The Institute of Training and Development (ITD), a professional consultancy institution from Malaysia, conducts the workshop, headed by key resource speaker Carmen Diokno, of the Philippines, with Serely Alcaraz and Rita Goh. 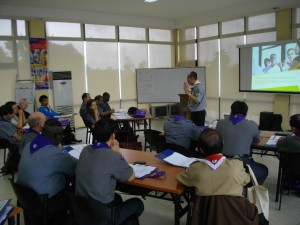 Opening the meeting, Abdulllah Rasheed, Regional Director of WOSM’s Asia-Pacific Region, briefly recalled the background and quoted from a letter received from Luc Panissod, Secretary General of WOSM. In his message, Mr Panissod had underlined the importance of the concept of Global Support and was pleased that a large number of volunteers and professionals had gathered to better familiarize themselves with the topic. The exchange of experiences made and sharing of knowledge gathered in several Regions in similar support systems was very helpful and would bring new dimensions and opportunities to further improve WOSM’s services to NSOs.

Andrea Demarmels, Member of the European Scout Committee, was very happy to attend this workshop: “The European Scout Region has built up significant knowledge over the past couple of years in direct consultancy to NSOs with its Tailored Support System. We have gained a lot of experiences, have seen success stories and overcome various challenges. Sharing these will no doubt be an added value for the Global Support System of the World Organization of the Scout Movement.”