(WOSM Europe/Evo) “Roverway 2012”, the major event for the senior age section of Scouting and Guiding organised by the European Regions of WOSM and WAGGGS, came to an end with a big party in Evo, Finland, early this month. Nearly 4000 young people from around Europe and beyond had discovered their host country when travelling in small mixed groups through Finland on 60 different “paths” before spending another four days camping together in Evo, Hämeenlinna.

During the second part of Roverway, the “Momentum Valley” provided a series of motivational activities, where participants and their patrols could share ideas and experiences. Plans for many interesting projects where thus developed which the participating Scouts and Guides promised to implement once back home. Within “Momentum Valley”, the “EUth Tent” was home of activities and workshops organised and facilitated jointly by WOSM and WAGGGS.

Two good examples of the offer available at the “Momentum Valley” were the activity “Path to Volunteer” and the workshop “Empower Yourself”. Both were facilitated by the Volunteering Working Group of the European Scout Region. The promotion of the management of adult volunteers in Scouting and Guiding as well as awareness raising of the value and professional use of skills gained as volunteers were the main objectives.

The “Path to Volunteer”

This was hosted by José Figueira (WOSM) and Rosemary Hindle (WAGGGS). Near the “EUth Tent” participants were invited to follow a real path to volunteering in a very dynamic and relaxed way. During three days more than 290 participants completed the path and were certificated as committed, motivated and skilled volunteers.

The Path was divided in three parts:

PASSION: The engagement in the Scout and Guide movements, or in any other volunteer-based organisation, is related to the need of one individual to fulfil his/her needs related to his/her personality and interests. The volunteer experience should ideally provide the opportunity to match them, and therefore develop oneself. Participants were asked to match some of their personality features and some of their interests in wallpaper. 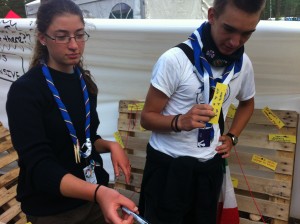 MOTIVATION: Fundamentally, volunteering is about giving one’s time, energy and skills freely and for free. Unlike many things in life, there is choice involved in volunteering. As a volunteer people need to make a decision to help on their own accord, free from pressure to act from others. As a volunteer it is essential to maintain motivation at a high level. People therefore need to be satisfied regarding their role and achievements in Scouting and Guiding. During the path participants selected different things that motivate them to volunteer and categorised them in a flipchart following their personal expectations. 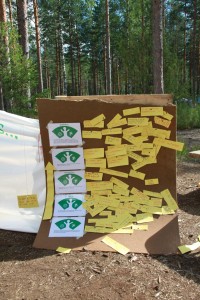 SKILLS: Volunteering is the perfect vehicle to discover something people are really good at and developing new skills. During the time as volunteer in Scouting and Guiding each person acquired some skills in different areas (i.e. communication; drawing; playing an instrument). Participants were invited to show their skills.

The Empower Yourself Workshop – Be a Volunteer, Become a Professional

This workshop was hosted by Claude Frantzen (WOSM) and Katerina Agorogianni (WAGGGS). Throughout the four days, ten sessions of about 45-60 minutes were run, with a total attendance of about 120-150 Rovers and Rangers. 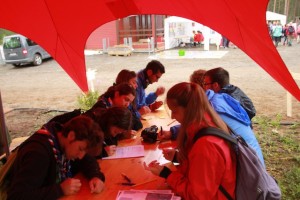 INTRODUCTION into the topic and awareness creating followed by a brainstorming session for which each participant wrote on post-it’s the skills and competencies that he/she thought to have learned or would be learning in Guiding and Scouting. Responses were then presented to the others and put into the five categories of competencies that one can find on the “Empower Yourself Document”.

PRESENTATION of the “Empower Yourself Document”, its mission, how to use it and its utility. Some clear examples were then presented and the participants were asked to try to use the document, working in smaller groups and trying to translate one of the skills found in part one of the workshop into a clear and professional sentence that could be used outside of the scouting world. After having returned from this exercise some participants were asked to present their outcomes to the others.

WORKING in pairs. Half of the participants were briefed to pick one other participant and to simulate a job interview with him/her at the point where the employer would ask about the involvement in Guiding and Scouting and what this brings. The one that played the employer had to be sceptical about the skills learned and thus awaken the other one to defend Guiding and Scouting as a learning organisation.

Summarising the volunteering activities at “EUth Tent”, the facilitators concluded that this type of activities well suited the particular age group addressed at “Roverway”-like events. “Once participants got explanations about the focus and objectives, they promptly show interest and enthusiasm towards a very active participation”, they said, not forgetting to thank the many volunteers who had contributed to the success of these activities.