Interest in Empower yourself! self-assesment tool is growing

Following the English translation of a successful French scout and guide self-assesment tool for volunteers “Valorise-toi!” and its presentation at the World Scout Jamboree in Sweden 2011, a number of other national translations have been prepared. Thus you can now “empower yourself”, besides in French and English, also in Czech, Spanish, Serbian, but soon also in Danish, German, Portuguese or Hungarian.

Also, during the Roverway in Finland this year, 10 workshops were held jointly by WOSM and WAGGGS for almost 150 participants with a renewed and more participatory approach. 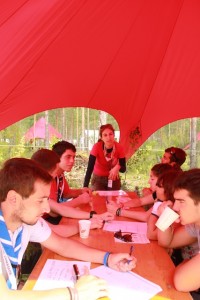 And the interest of other NSOs in translations into their mother tongue is growing! Which one will be the next?