(Vienna / PPÖ) – A last check. Scarves, shirts and Scout hats are all ready. And so are the Scouts who can’t wait to start their not so common adventure: when Inspector Barnaby’s colleague at the Criminal Police in Vienna, Inspector Schnell, was investigating in one of the recent episodes of “Schnell ermittelt” (literally: ‘Determined quickly’, a pun with the main character’s name), a famous crime series on Austria’s national TV channel, she was taken by surprise by a troop of local Scouts who were innocently walking through the woods. And could not refrain from looking through the window of an impressive caravan, where Ms Schnell happened to… 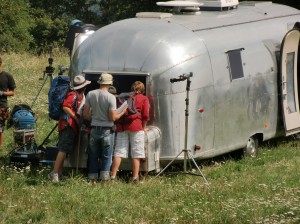 But let’s don’t disclose too much of the story for now. Let’s rather look behind the scenes and find out how local Scouts ended up on the film set. “In fact”, reports Georg, from Vienna’s 29th Scout Group in Dornbach (17th district of Vienna, Austria), “the film crew was looking for a group of children to animate a particular scene of a new episode of ‘Schnell ermittelt’, and the children of one of the crew happen to be Scouts in our Troop.” That’s how the young Scouts ended up on a beautiful meadow overlooking Vienna (see the second photo). “It’s incredible what amount of work is necessary before the actual shooting. Carefully brushing the hair. Checking the make-up. Adjusting the clothes. And all this was done by different specialists!” says Georg and then recalls the actual shooting: “When all were ready, Stephan (assistant director), explained who had to do what at which moment and how. Luckily, there was no text to learn. Because by now the level of nervousness was at its peak.” 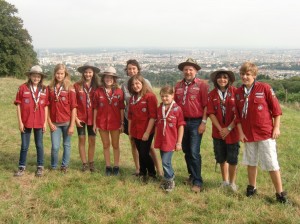 Inspector Schnell and the Amateur Actors

Georg doesn’t really remember how many times his friends Ilija, Stefan and Anja had to appear at the caravan’s window and quickly run away surprised by what they saw. “Only after many takes from different angles and with different lights, the film director was finally satisfied”, Georg says. Only to learn, that the same time consuming process was to happen once more for the shooting of the second scene: Georg, Vali, Lisa, Constanze and Nina, the remainder of the Troop, joyfully singing and walking down the meadow towards Vienna. Obviously, now there was sound, too. Georg remembers: “My instructions were to call my three friends away from the caravan and then to wander down the defined path singing the famous 1951 Jamboree tune”. Not too difficult, it seems. “And then, in the heat of the action, we sang the wrong song!” But it did not matter. At the end of a long memorable day – resulting in ten seconds of a 45-minute film – the amateur actors were compensated with plenty of food, drinks and small talk with Inspector Schnell, herself an active Scout in her young years!

For more information:
Vienna 29th Scout Group on the web and on facebook
ORF – the Austrian National TV Station on the web