(Stockholm/SSR) – Last year’s recruitment campaign succeeded in increasing the number of members in the Swedish Guide and Scout Association (one of the five Swedish National Scout Associations and largest member of the Swedish Scout and Guide Council) for the first time in nearly twenty years. Now the Council is preparing a new campaign to attract even more new members.

During the summer, the Swedish Scout and Guide Council will run movie ads in cinemas in Gothenburg, Malmö, Linköping, Lulea and Sundsvall. And in Uppsala, Örebro, Helsingborg, Jonköping and Gävle the campaign will use outdoor billboards. But above all, success will again rely on efforts undertaken by local groups all over the country. 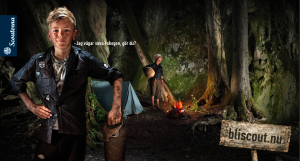 One of last year's campaign posters

“We try to support the local groups in their recruitment efforts”, says Ms. Jessica Jeja Svensson, marketing and communications strategist and responsible for the campaign. “The increasing numbers of members can be explained by our dedicated field workers and also by our Scout programme, which meets the needs of young people today. The campaign will reinforce these efforts”, Svensson continues. According to her, the best time to attract new members is when the school year kicks off, after the summer break. Similar to last year, the campaign will run from late August to mid of September and particularly aim at eight and nine year old girls and boys. And again, ICA, one of the leading retail chains in Scandinavia and sponsor of the Swedish Scouts and Guides, will support the campaign with a range of different activities.

“We want to get 400 local groups actively involved in the campaign”, explains Svensson, adding, that there were about 1000 local groups in Sweden with a total of some 70000 members. Through this year’s campaign, the Swedish Scout and Guide Council hopes that participating local groups will increase their membership by 10%. “It’s important to have a goal that’s easy to measure, you would want to know if you reach it or not. To succeed the campaign will focus on internal pride and external visibility,” says Svensson.

The campaign also gained a lot of attention from the prominent media coverage of last summer’s World Scout Jamboree, which was held in Sweden. Swedish Scout and Guide Council is a well-known trademark in Sweden. Research shows that 97% of Sweden’s population knows what Scouts and Guides are. “But the question is, whether they also know what Scouting and Guiding stands for”, wonders Svensson, “and that’s what this year’s campaign will focus on – showing the whole picture.”

For more details, please visit the campaign’s special website or the website of the Swedish Scout and Guide Council.