The 41st „Conference of German speaking Scouts & Guides associations“ took place in Vienna/Austria from February 24th to 26th. 76 participants from 10 countries, KISC, the Regional Committees, the European Scout Foundation and OBPS worked on the topic “The language of the young people – do guides & scouts still speak it?” 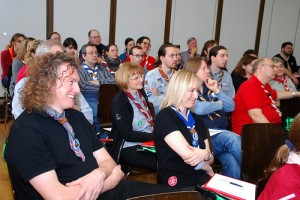 The informal meeting started Friday evening with an open space presentation of all the associations present. Saturday was devoted to the topic and started with a key note presentation by a representative of the Austrian Institute of Youth Culture and was followed by 4 workshops on the topics “Partnership with other Regions”, “Participation”, “Promise and tradition” and “Media variety”.

In the afternoon participants could choose between 4 touristy excursions in Vienna. The day ended with a gala dinner in the city centre. As part of the evening programme Hartmut Keyler who was a founding member of the “German speaking conference” more than 40 years ago gave a funny and interesting review of 40 conferences.

On Sunday morning Thomas Ertlthaler, member of the organizing team, read out a message by our chairman Craig Turpie that was followed by an update presentation by Corinna Hauri and Andrea Demarmels from the two European Committees on the work of the Region. After that the conference received an update on the work for the upcoming European Conference in Berlin 2013. 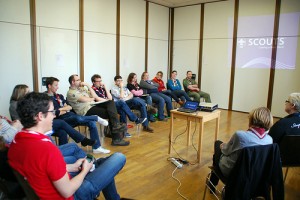 The rest of the morning was spent in network meetings (for example for ICs, Chief Commissioners or Training Commissioners) before the meeting was closed after lunch.

Next year the conference will meet again in Luxembourg.