(OBS/Shumen, Biser) – The situation in disaster struck Southern Bulgaria around the village of Biser remains critical and members of Организация на Българските Скаути, the Organisation of Bulgarian Scouts (OBS, the National Scout Organisation in Bulgaria) continue to be very actively engaged in relief work, as Yordan, their International Commissioner, reports:

“9 February 2012 – This is the last day of the 1st stage of the donation campaign, which was rapidly organized by Organization of Bulgarian Scouts (OBS) in favour of the people who remained homeless after the disastrous flood in Southern Bulgaria. The campaign’s objective was to provide most needed things, such as vital food products, clothes and wool blankets for the people in the village of Biser, whose houses remained flooded.

The campaign started in Shumen and was later spread throughout Bulgaria in towns with Scout Groups, including Targovishte, Popovo, Vratza, Yambol, and the capital Sofia. The result from this first stage is more than 550 bags of clothes, packages of wool blankets and coverlets, and more than 1.5 tons of packed food. 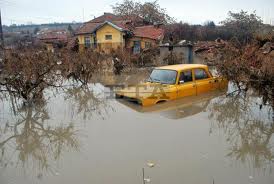 The Village of Biser (Bulgaria) after the Flood

On 10 February 2012, Scout Groups from all parts of Bulgaria are sending the donations from their local collection spoints to the regions which suffer the ruining outcome of the winter calamities in Southern Bulgaria. The donations will be accompanied by a team lead by OBS’ Chief Scout and National Coordinator, who are going to bring back information about the needs of the suffering people.

On this basis the efforts of the campaign will be re-directed and objectives for the 2nd stage will be defined in order to give the best support to the people in need. Meanwhile, OBS made necessary preparation and is ready to give shelter to 85 people in need at its Shumen International Scout Centre.”

Some further information:
– A brief videofrom ‘Novini’ in Shumen, Bulgaria
– A news item published by Bulgaria daily ‘Top Novini’
– A short video from the BBC