Fire – Rescue Service South Wales, UK, late last month has donated six fire engines to Emergencies department of Serbia. This general purpose fire trucks get a second life in our country because the law in their Service, vehicles are changed every 15 years. Average age of our vehicles is 30 years, so these donated vehicles and more than good for our firemen-rescuers.
The project grant called “Blazing It Serbia” started this spring at the initiative of Caerphilly fire station commander, Steve Logan and a group of his colleagues. The aim was to raise funds to transport vehicles from Caerphilly to Serbia, by driving through Europe. Also,  the youth section of firefighters age 15 to 18, joined to tihis action and helped  with their project activities. In addition to the many sponsors who donated money, the group has done a lot of public events such as car washing, packing bags in a supermarket, zumba classes, gala dinners … Many public figures have supported this action, the most famous person for us is our tennis player Ana Ivanovic.

Departing convoy was scheduled for 19 October and is scheduled five-day journey through six countries: England, France, Belgium, Germany, Austria and Hungary, and at the end of the vehicle came to Serbia. At the time, convoy had 50 of team members who daily crossed hundreds of miles,  one of team members said ”the vehicles we were literally buzzing of the sunset”. Despite the fatigue of driving almost 2500 kilometers long, the smiles on their faces did not miss coming to Serbia.
In addition to the six fire engines,  many other equipment donated  that is more than necessary to our firefighters, so  the total value of the donation is about 1.25 million euros.
This whole story would not have been possible with out  scouts from Serbia and Wales.

The story begins with the 2005th when a group of 11 scouts from Caerphilly stayed with the scout group “Bosko Palkovljević – Pinki” from Sremska Mitrovica in the mountains Sokolski, at their summer camp. Welsh scouts next year, 64 of them, participated in the Scout Jamboree in Nis, Serbia, where they photographed over 30 year old fire truck ‘TAM’ that protected the participants of the Jamboree. This image is shown to the Caerphilly unit firefighters who then decided to visit colleagues in Serbia. Cooperation between firefighters and Scouts and continued during subsequent visits where scouts from Scout group “Pinki” participated as interpreters. During nine visits of  Welsh firefighters,  numerous equipment was donated,  and  if replaced because of the relatively small age in South Wales, has much to serve here in Serbia. Over the past four and a half years have been mutual visits and each time participated a group of Scouts from the two countries.
In this project, 30 scouts from Wales who had been  this summer at the Scout Jamboree Serbia “100 years young” in Sabac, donated over 1000 pounds to implement, so that one of the vehicles that were in the convoy stood Scout sign, in gratitude for the support . 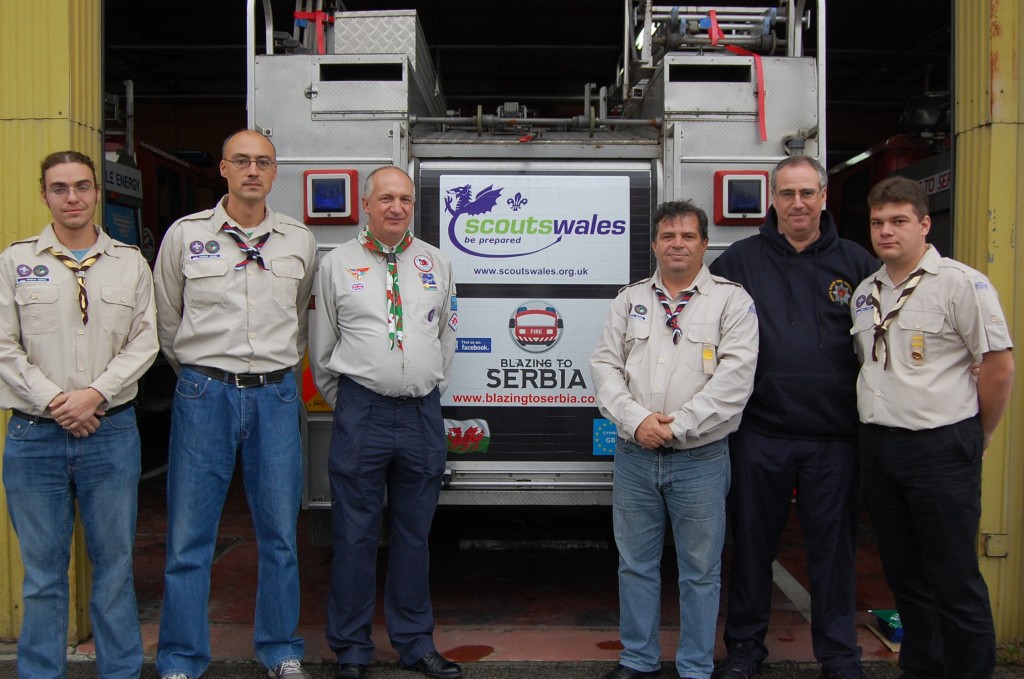 Scouts from Wales and Serbia in visit to firefighters

How many scouts have contributed to this cooperation, according to award gold medals of Ministry of Internal Affairs, to Scout group “Bosko Palkovljević – Pinki” from Sremska Mitrovica for the Improvement and development of Emergencies department of Serbia.
This is one of the largest donations by the Welsh firefighters so far, but as they say, ‘not last’. The connection between the scouts and firefighters has become even stronger and continues in the future.

Author of the post is: Aleksandar Kocic from Scout Group “Pinki” – The Scout Association of Serbia