(Madrid/MSC) – Continuing a tradition as old as the event itself, Catholic Scouting played and active role last summer when the Catholic Church had invited its young members from around the world to travel to Madrid to the “World Youth Days 2011 (WYD2011)”. And more than 2 million young people came, many of whom were Scouts or Guides.

With the event taking place in Spain, it was the Movimiento Scout Católico (MSC, a member association of the Federación de Escultismo en España, the NSO of Spain), which helped organising programme elements for Catholic Scouts, including a special camp for those who preferred genuine Scout camp atmosphere to overcrowded youth hostels or parish halls.

Many of the Scouts participated in the different activities wearing their scarves and uniforms and were very visible among the large crowds of young people.

Unfortunately, not all participating Scouts had known in advance of the activities, which MSC had especially set up for Scouts; the information simply had not reached those who had registered as parts of a local parish group or otherwise. 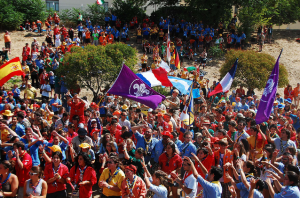 Young Catholic Scouts at the World Youth Days 2011 in Madrid

One of the principal activities was certainly the special camp set up by MSC at “La Almudena”, which hosted more than 2000 Catholic Scouts from 25 different countries on three continents. Opened with a Scouts’ Own at the beginning of the WYD, the camp was closed with Mass held by H.E. Bishop Xavier of Solsona, himself a ‘former’ Scout.

Another activity organised by MSC was a stand at the “Vocational Fair” in the Parque del Retiro, where information about Catholic Scouting was shared.

But among one of the WYD’s highlights – at least from the Scout’s perspective – was the Scout flashmob: more than 3000 young Catholic Scouts gathered at the Plaza de Callao in the evening of 17 August 2011. Details about venue, date, time the song as well as the dance moves had been spread via internet in advance and rehearsed locally. The result was outstanding, a colourful, memorable and inspiring session. And what’s best, even those who where not there can join-in – by watching the flashmob-video.