(Helsinki/SP-FS) – The Rover Scouts from the Vartiovuori Scout Group in Helsinki (Finland) have combined their knowledge of history of art, with computer editing skills and their love of Finnish nature! The result? A spectacular calendar for 2012!

You will probably already have come across calendars edited by the local fire brigade, the sons and daughters of local farmers, the high streets’ merchants or your favourite hockey club. Each of them trying to attract our attention by more and more attractive motives and increasingly sophisticated designs.

So, why produce yet another? Because this one is different! In fact, “Poikakalenteri 2012” is an ironic interpretation of all those other fund-raising calendars out there. And it certainly does not lack a sense of humour. You can almost feel the fun the amateur models must have had when the different photographs were taken. 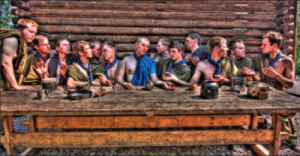 The choice of motives was inspired by a mixture of local and international paintings and reflects sound knowledge of classical and contemporary art. The selection ranges from world famous works, such as Michalangelo’s Creation of Adam (January), Rembrandt’s Anatomy Lesson (November) or da Vinci’s Last Supper (December). Finnish paintings include Simberg’s Fallen Angel (June) and two works by Akseli Gallen-Kallela (September and October).

Lauri Vartiala, one of the Leaders involved in the project, explains that one of the main aims was to develop a creative fund-raising project which would help finance future activities of the Vartiovuori Scout Group, adding that “the Calendar is perfect to decorate bedroom or bathroom walls. It is also a splendid present for a sister or boyfriend. And why not offer it to other relatives or your neighbour? Just be aware that you might be temped to keep the ordered calendar for yourself. Giving it away may be more difficult than painting blindfolded!”.

Before placing your online order  you can preview the calendar.