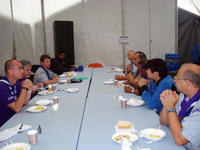 Chairman Craig Turpie, on behalf of the European Committee, welcomed those present. He said he appreciates this initiative to share and discuss matters of mutual interest and to understand the priorities and working methods of each region. Nicholas Tang shared some of the challenges in the Asia-Pacific Region and its strategic priorities for the current planning period. He said that for the next three years, membership growth will be the focus while paying attention to ensure quality Scouting. Scouting in Asia-Pacific is largely school-based. He said, “We are expanding Community Based Scouting too”.

Craig Turpie said, “Growth is a priority of the European region and we working on it very strategically”. He also said that the Europe is currently partnering with Africa, Arab and Eurasia Regions based on old ties. He stressed on “youth involvement”, and in the context of the European region, involvement of young people is inherent in membership and there is no specific Youth Forum to achieve greater youth involvement. The concept of Young Adult Members in Asia-Pacific was shared.

On matters related to scouting guidelines at world and regions, there was a general agreement that it should not be prescriptive, rather it should be more generic. This is a way to respect diversity while taking actions locally.

The CNV concept being practiced at the Asia Pacific Region was shared, stressing that it is a useful and educational exercise in building cooperation between the National Scout Organization and the Regional Committee.

Committee members concluded that Europe and the Asia-Pacific, being two strong regions of WOSM, need to continue the dialogue especially just before World Scout Conferences. They need to create cohesiveness while understanding the diversities that exist between them.

Craig comes from the United Kingdom and was Chairman of the European Scout Committee and a Member of the World Scout Committee. He was following the Region's work on Organisational Development. Craig was also a committee contact for Andorra, Hungary, Kosovo, Latvia and Spain.