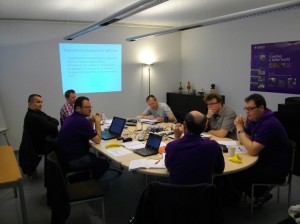 The Organisational Development Core Group met this weekend in the regional office in Geneva to set the ball rolling on the tasks assigned to their area of work.

The team’s first task was to begin to develop a model for Organisational Development and by the end of the meeting an initial draft model was put in place. The team also allocated tasks based on the Regional Scout Plan’s actions and debated how these actions will be implemented throughout the next three years.