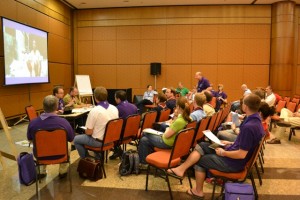 The meetings follow the first such gatherings which were convened in Korea in 2008, but this time, there was more advance warning and structured agendas for the meetings. As a result, levels of participation and the quality of the contributions was positive.

Issues that were discussed at the Europe-Africa Contact Meeting included the following:

Issues that were discussed at the Europe-Eurasia Contact Meeting included the following:

The responses from NSOs/NSAs attending both of the meeting was generally positive.