Peacelight 2016: “Blessed are the peacemakers!”

(Vienna/PPÖ) – Hundreds of Scouts and Guides from associations in more than 25 countries across Europe and from overseas had gathered in the Syriac-Orthodox Church and listened to this verse from the Beatitudes and the reflections around this year’s theme of the central Oecumenical Peacelight Ceremony in Vienna, Austria, earlier this month: “Building Peace with Courage and Creativity”.

“If there was a simple recipe for peace, it would long be reality”, The Rev Wolfgang König said during his homily, “If there was a universal key to peace, we would already enjoy paradise on earth.” He then recalled that at the time Jesus had preached the Beatitudes to his followers some 2000 years ago, his home and the surrounding countries were as hostile and in turmoil as the region around the city of Bethlehem is today, the very city where the candle with the Light of Peace had been lit in the Chapel of Nativity.

Taking the Light of Peace and its message of hope home to our families, friends, neighbours and communities may be a first step in living the Beatitudes: “when the meek will finally have succeeded, when those who seek righteousness will be proven to be right, when the peacemakers will live as children of God, then all will be good.” 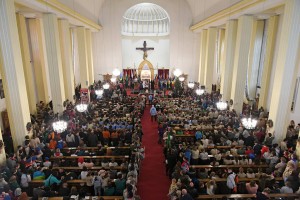 Scouts and Guides from around Europe gather for the Ecumenical Serice in the Syriac Orthodox Mor Ephrem Chuch in Vienna (image: PPÖ/Rudi Klaban)

“Once we creatively follow the Beatitudes, we will be satisfied and we will be able to look at ourselves in the mirror. We will not be the first ones doing so. Many have done their best already. So, if we have courage and use our creative imagination to contribute to building peace in our neighbourhood and communities, we can leave our world a little better than we have found it!”

Representatives of the Youth Council of the Scouts and Guides of Austria had opened the Oecumenical Service welcoming many delegations from around Europe and overseas, some present for the 28th time and others attending for the first time, like the Universal Syriac Scouts (a National Scout Association affiliated with the Lebanese Scout Federation and closely linked to the Syriac Orthodox Church, with many local groups operating in the diaspora). 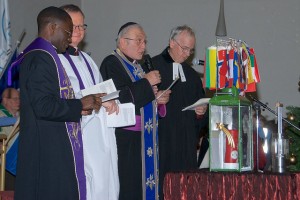 After an oecumenical prayer led by The Rev Fr. Ndumba Douglas Ukomeno, of the Roman Catholic Church, The Rev Canon Patrick Curran, of the Anglican Church, The Rt Rev Chorepiscopos Emanuel Aydin, of the hosting Syriac Orthodox Church, and The Rev Wolfgang König, of the Protestant Church, the great moment came: Melanie (12), this year’s Friedenslichtkind (“Peacelight Child”), lit the official Peacelight Candle of the Scouts and Guides of Austria with the flame she had brought all the way from Bethlehem in November. It was the 28th time that this small gesture with a huge impact happened: initiated in 1986 by the Upper Austrian Broadcasting Corporation (ORF Oberösterreich), the Scouts and Guides of Austria have been instrumental since 1989 in helping carry the Light of Peace of Bethlehem to all corners of Austria and to neighbouring countries, with more and more Scout and Guide Associations coming to Vienna each year to fetch the Peacelight and to take it home to their villages, towns and other countries. Today, the Peacelight reaches all countries in Europe and many more in other parts of the world, thus contributing in its unique way to building peace in communities close by and far afield. 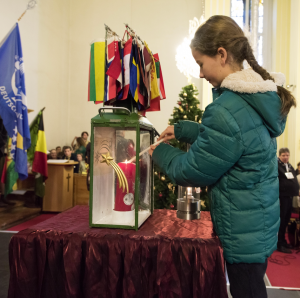 Melanie, this year’s Friedenslichtkind, passes on the flame of the Peacelight to the official candle of the Scouts and Guides of Austria (image: EEUDF)

One by one, 24 international delegations and representatives of the nine provincial associations of the Scouts and guides of Austria came forward to have their candles lit with the flame of the Peacelight, sharing a message in their respective languages while this was done.

They then returned to their home countries by car, bus, train or plane carrying the small and fragile flame in protective candles and sharing it along their way with others who had not travelled to Vienna themselves. Sometimes on the platform of a station they train passed, at border crossings and finally at Oecumenical Services in different parts of their countries.

Scouts and Guides from the nine Provinces of Austria have lit their candles (image: PPÖ/Rudi Klaban)

This was the case for the 36 Rovers and Rangers of the Scouts et Guides de France (SGDF, predominantly catholic) and the Eclaireurs et Eclaireuses Unionistes de France (EEUDF, predominantly protestant) whose bus took them back home during the night, with stops in Mulhouse, Strasbourg, Nancy and other cities along the way, finally arriving on Sunday morning in Paris at the Temple Saint Esprit (United Protestant Church) in Paris.

In his homily, The Rev Marc Schaefer (from EEUDF and the United Protestant Church in France), who had accompanied the French delegation to Vienna, reflected on psalm 146: “Human beings, including the powers of our world, are just ephemeral, but unfortunately they can do a lot wrong. But there is hope. Fragile and small like the flame of the Peacelight, and strong willed like those women, men and even children and young people who have, throughout our history and to date, given encouraging testimony that it is possible: to build peace with courage and creativity.” 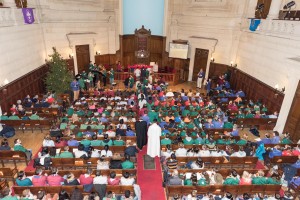 The Peacelight arrives at the Ecumenical Service in Paris on Sunday morning (image: EEUDF)

“Yes, I am confident that the power of this small and fragile flame can make the difference in our world next door and far afield. With this light, its warmth and message of hope, we show all those who suffer socially, physically, morally or spiritually, that our Lord, from generation to generation is here amongst us and part of the links between us which we encourage and foster.”

It was not by shear coincidence that the central Oecumenical Service was held at a Syriac Orthodox Church in Vienna. The Rev Marc Schaefer underlined the symbolic character of this choice, linking it to the cruel atrocities of war the people in Syria are confronted with, in particular in the city of Aleppo. Citing the Apostle John, he said: “This is the true light, which illuminates all mankind who enter the world,” concluding that “We shall not fear sharing this little flame and acting as its bright messengers when passing it on to all dark corners of our societies and our world.”

Let us all be that Light of Peace and bring comfort and hope to our families, neighbours and communities! Contact your local Scout Group or Association to find out where you can light your own candle with the flame of the Peacelight 2016!