The large hall of the Podgorica Culture and Art Centre was not big enough for the hundreds of Scouts and other guests who had travelled from all over the country and beyond to Montenegro’s capital city earlier this month to celebrate the first sixty years of Savez Izviđača Crne Gore (SICG, the Association of Scouts of Montenegro).

For a few of the people that had arrived at the Centre hours earlier, this moment was the long awaited climax: a volunteer team from the Association had spent several weeks in preparing a colourful and entertaining three-hour programme with and for Scouts of all ages and their guests. 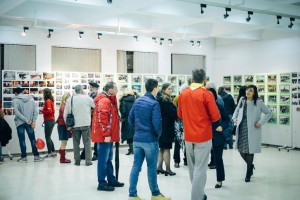 But before entering the hall, the guests passed the first highlight of the event: Sixty years in six hundred pictures! The walls of the lobby were covered with photographs illustrating the colourful history of the Scout Movement in Montenegro. “Ha, that’s me”, “And this, is this not your sister?”, “Oh yes, I do remember that camp as if it had finished only last weekend” were just a few comments as visitors identified themselves and their friends in pictures taken at events several decades ago or just last summer. The room was filled with laughter, smiling faces and emotional moments when old friends met once again after so many years, still proudly wearing their scarf. Closely looking at the different photographs from bygone days they remembered all the activities and camps they had been to with their Scout Group.

Then it was time to find one’s seat in the hall. The lights were switched off and as if by magic the audience was watching a ceremony, with the sun slowly rising in the background! Scouts emerged from tents and gathered around the flag-pole to greet the new day. The flag was hoisted and the anthem sung. An emotional moment for many in the audience, as they recalled similar ceremonies held at Scout Camps they had attended. 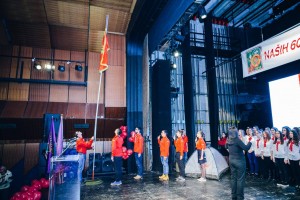 Let’s greet the new day and hoist our flag)

An anniversary such as the diamond jubilee of Scouting in Montenegro is always a good opportunity to recognise individuals, friends and partners for their involvement and contributions past and present. Not different here: commemorative plaques were presented to representatives of institutional and commercial partners, to former presidents of the Association and many others who had offered their support to the Scout Movement.

In their addresses, Momčilo Zeković and Peko Vukadinović, respectively President and Chief Commissioner of SICG, traced back the Association’s history. They thanked all who had and continued to recognise the values and mission of Scouting and the work of the numerous volunteers who where instrumental in achieving the goals of Scouting by planning, running and further developing a variety of programme activities for the children and young people. They invited everybody to see some of those activities for themselves during a visit of the Montenegrin National Jamboree in 2018. 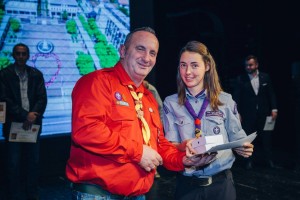 Among the many guests welcomed were delegations from Scout Associations of countries in the Balkan region (including from Bosnia-Herzegovina, Bulgaria, Croatia, Serbia, and the FYRO Macedonia). Regional Committee member Chip Veerle Haverhals represented the entire European Scout Region and transmitted greetings on behalf of the World Organization of the Scout Movement (WOSM).

“What you and your friends live in your patrols and local Groups, what you experience as local or national Leaders, 40 million other Scouts live and experience all over the world. With enthusiasm and commitment you and I and all 40 million other Scouts around the world help create a better world every day. May this continue for the next sixty years and beyond!” Chip concluded her remarks in wishing all Scouts in Montenegro a very Happy Birthday and thanked them for their valuable work: “Hvala vam puno za sve što radite i Sretan Rođendan!”

After this series of speeches it was time for pictures again: two video clips allowed the audience to once travel back in history once more (“Sixty years of Scouting in Montenegro“). They were greeted with huge applause. 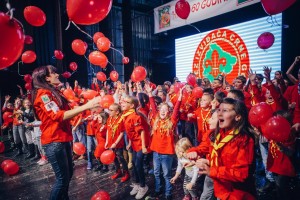 “Marame” – sung and performed by 60 Scouts

Another huge applause was offered to lead singer Iskra Zeković (from the “Gojko Kruška” Scout Group in Cetinje) and the Scout Choir of more than sixty Scouts from the “Stara Varoš” Scout Group (Podgorica) and the “Nikola Đurković” Scout Group from Tivat, who closed the official part of the event singing “Marame”, a popular Scout song in Montenegro!

Thus, a successful event came to a close, happy and smiling faces of those leaving the hall giving the best feedback the organisers could have hoped for. At a closing campfire the audience might as well have shouted “B-R-A-V-O. Bravo. Bravo. Bravo. Very well done!” True for this evening. And true for the past sixty years of Scouting in Montenegro.