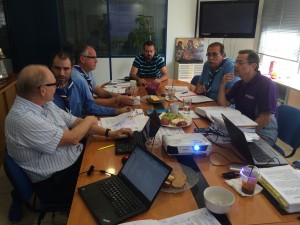 “It has been a very good exercise to prepare for the assessment”, says Christos Lygeros, Chairman of the national board, Scouts of Greece, just before we started to go through the Global Support Assessment Tool. He and his executive team from Scouts of Greece has spent the last two months preparing an external review of their organisation based on the WOSM standard on best practice in quality scouting. The standard (GSAT) is a service certification aimed at assessing the accountability of a national scout organisation and is developed together with the world’s leading certification company SGS. The assessment has been done all over the world and in many European national scout organisations during the last two years.

“It is always good to have an outside perspective on your organization to see both your strengths and weaknesses and in this case it is a standard based on best practice in NGO and other national scout organisations, which makes it more relevant to us”, says Aggelos Karamanis, International Commissioner and responsible for preparation of the Assessment supported by the team and a WOSM facilitator.

During the 17th-18th September 2016 an external auditor from the Swiss Company SGS and a trained facilitator from WOSM was visiting the National scout organization to do a third part assessment with purpose og getting a certificate. The team spent two days together in the head office in Athens discussing quality in scouting and checking documents, procedures and evidences on how Scouts in Greece is doing in different fields. The outcome of the exercise is both best practice for other scout organisations to learn about and potential for improvements in Greece.

After the assessment the Greek scouts will make an action on the basis of the results of the assessment and discussion of needs in the NSO: With help from WOSM facilicator from European region NSO can request support from other NSOs or and expert from WOSM.

If you want to know more about GSAT you can contact the director for organisational development, Jordan Bajraktarov.

Tagged with: GSAT • Scouts of Greece