The Eurasia and European Scout Regions Seal Their Partnership

The recent 3rd Europe-Eurasia Leadership Training and Partnership Meeting held in Tbilisi, Georgia, from 13 to 16 May 2016, was the more then fitting background for a small ceremony during which Irina Pruidze and Andrea Demarmels, Chairpersons of the Eurasia and European Regional Scout Committee, respectively, signed the new Partnership Agreement between the two neighbouring Regions of the World Organization of the Scout Movement (WOSM). 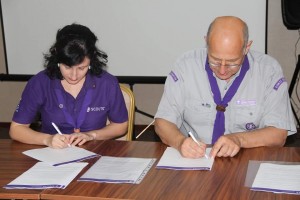 Irina and Andrea signing the new Partnership Agreement between the two Regions.

“The main aim of our new Partnership Agreement is capacity building of the member NSOs of both Regions through increased cooperation between the two Regions”, commented Irina and Andrea during the ceremony. “We hope that the Agreement will further promote mutual partnerships between NSOs of the two Regions and also help develop the collaboration of both the Regional Support Centres and the two Regional Scout Committees.”

After more then ten years of mutual partnership activities on regional and NSO level the Eurasia and European Scout Regions review their relations and the needs and aspirations of young people in today’s societies.

“We want to send a clear signal of solidarity and partnership”, the two Chairpersons added, “Which is why in a spirit of unity we have decided to seal our common understanding in this Agreement, which focuses on three main areas: (1) the fostering the development of each member organisation in the two Regions, (2) the promotion of intercultural learning in respect of each other’s values and beliefs, and (3) the ensuring and provision of best support for our member organisations.”

Participants of the 3rd Europe-Eurasia Leadership Training and Partnership Meeting (Tbilisi, Georgia, 13-156 MAy 2016)

Before and after the ceremony, representatives of NSOs of both Regions attending the 3rd Europe-Eurasia Leadership Training & Partnership Meeting had a series of workshops in which they focused on two main areas:

One aspect was related to the sharing, discussing and commenting the new WOSM leadership model, developed following the 21st Century Leadership discussions held in WOSM in the last years. The model consists of four fundamental parts:
– (value-based) PURPOSE with visionary skills,
– (empowering) INDIVIDUAL with self-management skills,
– (collaborate with others) PEOPLE skills
– and a PROCESS of learning by doing (management skills).
Scouting at its best develops these four skill sets in different ways.

The second main area was related to the sharing, creating and experiencing the topic of partnerships with a focus on how to evaluate and measure the impact of partnerships on the young people engaged in the activities and our Scout practices.

The overall objective of 3rd Europe-Eurasia Leadership Training and Partnership Meeting was to provide opportunities to NSOs engaged in mutual partnerships (or desired to enter in new relations) within Scouting to reflect on their current relationships, strengthen them and get the possibility to create new ones. Particular importance was given to the funding opportunities.

The meeting was hosted by the Georgian Organisation of the Scout Movement, the NSO in Georgia established in 1993.