(Bucharest/ONCR) – Earlier this week, Teo and Andrei were part of a group of 13 Scouts meeting His Excellency Klaus Iohannis, President of Romania, in the gardens of Cotroceni Palace, the Presidential Palace in Bucharest. Joining them were Sabin Mureșan, President of the Romanian Scout Organisation, and João Armando Gonçalves, Chairperson of the World Scout Committee. 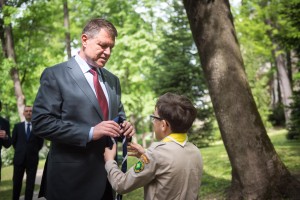 Andrei presenting the National Scarf to the President of Romania

But before he met with the younger representatives of the organisation in the gardens of the Presidential Palace, His Excellency had already welcomed Sabin and João inside the Palace. During that meeting, the two sides discussed the possible modalities of re-confirming the Romanian President’s status as High Patron of the Romanian Scout Organisation. The long history of Romanian Scouting was also mentioned, including the starting of the early Scout Groups, which were established well over 100 years ago. In more recent years, the trusted partnership between the Scout association and the Presidency had made it possible to organise the National Jamboree “RoJAM 2011” (in Săliște, Sibiu) and to celebrate the Centenary of Romanian Scouting in 2013 (in Mogoșoaia). 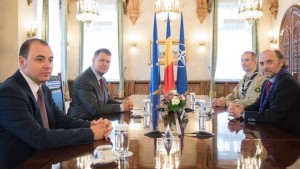 Sabin and João with the President at Palatul Cotroceni

Today’s meeting between the President and Romanian Scouts was a natural step on the way to turning this partnership into an even stronger one in the years to come. For example, the Scout educational programme currently offered to over 4000 young people will in the future only be available through the Romanian Scout Organisation.

“I am convinced”, remarked His Excellency, “that involving children in activities such as Scouting is the appropriate way to educate them in a practical, creative and innovative way. Projects such as the current “A different kind of school” (Scoala Altfel) week are a perfect framework for first steps: the participating boys and girls discover important elements of Scouting, including the Scout salute and handshake, which symbolise respect as a fundamental value in life.” 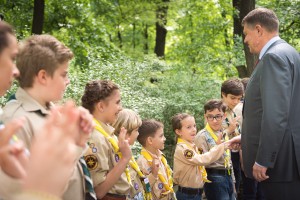 Sabin, president of the Romanian Scout Organisation, added: “Today, we reconfirm our trust and willingness to join the Presidential Administration in the efforts of creating a civic society based on high quality education for children and young people. The common denominator between the vision of Romania’s President and the Scout Movement – not just in our country – is to create a society where people feel fulfilled as individuals and play a constructive role.”

“Romanian Scouts take responsibility in enabling this society of involved and contributing individuals by creating training and development opportunities for children and young people. Our programmes based on the Scout Method of non-formal education provide a qualitative and balanced development of our members.”

Concluding the meeting, Sabin extended an invitation to H. E. Klaus Iohannis, hoping that the President would find time to pay “RoJAM 2.017″ a visit next year, when the next National Jamboree and largest event of the non-formal education sector would be held in Cristian (Brașov county) to celebrate the 110th birthday of the Scout Movement.