(WOSM/Brixen-Bressanone) – This past weekend, from 12 to 14 February 2016, some 80 participants from a number of German speaking Scout and Guide Associations in the European Regions of the World Organizations of the Scout Movement (WOSM) and the World Associations of Girl Guides and Girl Scouts (WAGGGS) met for their annual informal gathering in Brixen/Bressanone in the Autonomous Province of Südtirol/Alto Adige in Italy. 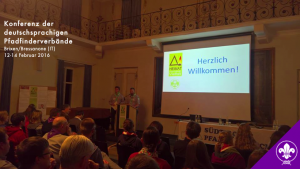 A year ago, the hosting Südtiroler Pfadfinderschaft (Which is affiliated to AGESCI, one of the two Italian National Scout Associations) had announced the meetings theme: “Heimat: Identität – Vielfalt”. They probably did not anticipate that this theme would be highly interesting given the current discussions throughout Europe around refugees, migrants and asylum seekers. Indeed, it  provided an interesting framework for fruitful discussions throughout the two-day meeting.

Scouts and Guides engaged in refugee and migrant support activities
As part of the programme, the European Scout Region facilitated a workshop around the challenges of the refugee and migrant situation many European countries are currently facing. The workshop was connected to the outcomes of last year’s Refugee Response Seminar in Copenhagen (DK).

Three questions were discussed:
(1) What is the responsibility of Scout associations and where does the responsibility end?
(2) What kind of projects and actions can be developed by Scouts to address long term challenges?
(3) What do our Leaders need from us (i.e. the regional level) to work in their local communities?
During this part of the workshop, participants gathered words and phrases that they had in mind based on their experience but also based on recent news reports (see the attached summary for some of the results).

Tailored support as a tool for learning and change
Another presentation, prepared by the Organisational Development Core Group (ODCG) of the European Scout Region, presented an overview of WOSM’s Global Support Assessment Tool (GSAT) and the European Scout region’s activities in the area of Tailored Support (TS). This triggered off a lot of bilateral discussions focused on the opportunities offered by GSAT and TS, which – by the way – is also available in the context of refugee and migrant support activities refugee response. Both support concepts have proved to be very effective and efficient tools to facilitate change and learning in National Scout Organisations (NSOs) and National Scout Associations (NSAs), as feedback from the last two years show. 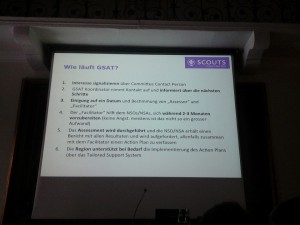 Presenting an overview about GSAT

With new ideas and inspiration from a great event, perfectly organised by the Scouts of Südtirol/Alto Adige, participants went home to continue their good work and start new initiatives – some of which already presented during the meeting’s closing session.

If you have missed this event, don’t worry: the Pfadfinder und Pfadfinderinnen Liechtensteins (PPL) will host next year’s Conference of German speaking Scout and Guide Associations in the principality in March 2017.