(WSBERO/Brussels) – I had the opportunity to help organise a round-table on LGBTI in Scouting in the beginning of summer. We had a great event with a number of very knowledgeable and inspiring people, both participants and invited guests. The work we did will really help make the upcoming regional training in November more effective and interesting. Still, when Scout Associations around the Region are facing so many different challenges, one can wonder whether they should work on this and other topics under the diversity priority umbrella.

For me, it is simple. As a movement, Scouting has a purpose – to support young people everywhere in their personal growth so that they will be creating a better world wherever and whenever they can. But we can’t support anyone if they stay away from us. In Swedish there is a saying, inviting someone with the elbow – it means saying to someone that they are invited but not really making an effort for them to feel invited.
One way of inviting with the elbow is by stereotyping. No-one likes to be pigeon-holed, restricted by the assumptions and expectations of others. Especially in Scouting, where you are supposed to be able to grow and try things in a safe environment. That’s not to say Scout Leaders and Scouts are doing something bad on purpose, it’s a normal human thing to make assumptions when we meet someone. But the combined innocent assumptions creates structures that do restrict us, all of us. 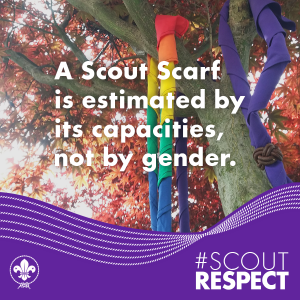 A Scout Scarf is estimated by its capacities, not by gender.

A good example is gender expectations. Imagine a mixed group going on a weekend hike, cooking pitching tents. There expectations of parents, the other scouts, us as Scout Leaders and the Scouts themselves makes it just easier for girls and boys to do what is expected of them, be it boys pitching the tents and goofing off or girls cooking and cleaning up the camp site. Not everyone does it, but it is easier to go along with the expectations instead of fighting the structure.

As a Scout Leader it is also easy to handle a situation like this in a gender blind way. That could mean thinking and saying: I don’t and won’t care if it is a girl or a boy, I will treat everyone equally! But ignoring that will at best leave the Scouts to handle the structures unsupported and at worst reinforce them when Scouting is supposed to be a place where it is okay to learn new things.

But if you do that without being aware of the unvoiced expectations from all around, the structures, you might end up reinforcing them instead of creating a place where it is okay to learn new things.

Another way is to have gender awareness integrated in the Scout programme. That means taking into consideration that the expectations already exist, nudging our Scouts into one behaviour or another, and making sure to reduce them within Scouting. For example, by forcing a rotating schedule of the tasks (especially the gendered tasks) so that all Scouts get to try out, practice and excel at things they and others never thought they could do well. The result, they all get better at everything, the Scouts are not restricted by the expectations of others or themselves and they will find that all have something to learn and often something to teach each other’s.

I think a place like that is definitely somewhere young people want to be, where they don’t need to be pigeon-holed and expected to either comply with or actively rebel against the roles and expectations our society is filled with. To be aware we must know the facts, which is why I so enjoyed the recent round-table on LGBTI and look forward to the coming trainings and round-tables organised by the region.

As a movement we need to be aware and work with ourselves to be able to actually reach the young people our mission tasks us with supporting. So this way of thinking and these values must be a fundamental part of how we organise and develop ourselves.

And meeting everyone with respect, curiosity and empathy – these are definitely the values they need to have when our scouts are working on creating a better world!