The 15 000 participants of the National Jamboree “You’re Up!” adopt a resolution on the Europe of Tomorrow

Over the past days, 15 000 Scouts and Guides aged 14-17 years coming from 29 countries met in Strasbourg (France) at the NAtional Jamboree ” You’re Up”. 800 of them spent a day at the Parliament of the European Union to discuss a resolution on the Europe of tomorrow.

Pierre Arlaud, member of the volunteer team responsible for external relations for the World Organization of the Scout Movement (WOSM) and Chairman of the meeting, shares his impressions of the day. 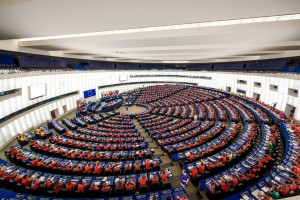 Scouting and citizenship
I just came back from Strasbourg where I spent five days with 15 000 Scouts and Guides from 29 countries. These young people aged 14-17 years, their leaders, all the volunteers and the organisers of the National Jamboree “You’re Up!” are part of the world to which everyone aspires. The Scout Method led them to accomplish an amazing feat in three days. 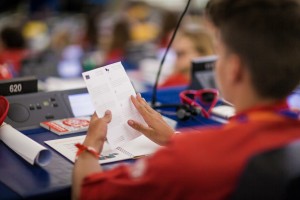 An ambitious European citizenship
Elected by their teams to represent them, 800 young people sat on 17 July 2015 in the Chamber of Parliament of the European Union in Strasbourg instead of the MEPs. They presented, amended and voted resolutions before the MEPs to formalise their commitment in building their Europe.

The Resolution for the Europe of Tomorrow (English version, French version) is a promise to act for a Europe built on solidarity, that is more democratic and respectful of Human Rights, a Europe that allows everyone to live, together, in harmony with our planet. It offers three concrete actions on six topics: environment, solidarity, youth, human rights, culture and democratic life. This resolution signed by 15,000 Scouts and Guides will be circulated within all the Scout and Guide associations across Europe and the world. An assessment will be made during the forthcoming Europe Day on May 9, 2016.

This unique demonstration is the mark of a creative Scouting and action capable of projecting the necessary change in society and implement it. From idea to action, they are the true drivers of change. They brilliantly embody the vision of a stronger Europe, more real and more citizen. 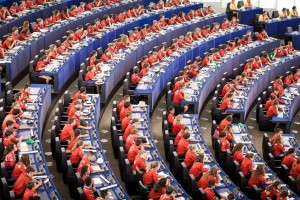 Living together happily, in diversity and exchange

The Scouts and Guides from different countries took the time to exchange and share their practices, traditions, religions and spiritualities. Moreover, several days were dedicated to meeting others in Strasbourg and its region. The Scout Movement offers a huge opportunity to meet people. This dialectic and shared citizenship leverages the experience and approach to the world of these young people. Some will find the click of a future genuine and selfless commitment. 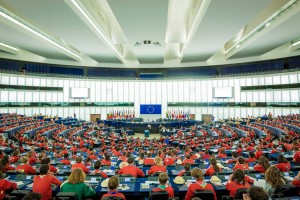 View from the back neches of the hémicycle

From the challenge of a collective organisation to natural solidarity
In a huge ecological ephemeral city, the Scouts and Guides have set up their camp before it was swept by a violent storm. In a few hours, they enthusiastically rebuilt the camp where they stayed. During these hard times, an incredible exemplary of all submerged the place and the participants. Solidarity, a sense of service and confidence in each other, helped to make this challenge a great learning opportunity. 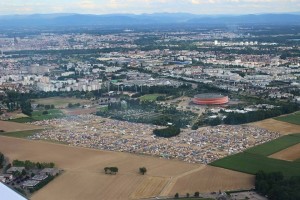 I took part in these three moments: the session at the European Parliament, the sharing of interreligious and intercultural exchange and the reconstruction of the camp. I have rarely experienced so much emotion within a few days. The reason is simple: Scouting transcends people by inviting them to give the best of themselves and by sharing. It is the strength of a mobilised social intelligence. What sustains Scouting is the absolute citizenship.

Links:
The French National Jamboree “You’re Up!” on the internet and on Facebook.
The Resolution for the Europe of Tomorrow (English version, French version)