Ten days after the devastating passage of cyclone Pam, the small island republic of Vanuatu in the South Pacific is slowly beginning to recover from the worst cyclone hitting this area in hundred years.

Gaël Audras, a Scout Leader engaged in civilian service for the Scouts et Guides de France and currently living in Port Vila, the country’s capital, has shared his first impressions:

Vanuatu is an archipelago in the middle of the South Pacific situated some 500km to the northeast of New Caledonia. The former Anglo-French condominium gained its independence in 1980 and about 250000 Ni-Vanuatu (or Ni-Van) call it their home.

As early as on the morning following the cyclone’s passage on 13 March, the inhabitants were busy clearing away the mess and cleaning the principal roads. The damage across the islands is considerable, in particular in infrastructure and housing. Many families have lost their homes and with them their belongings. The number of victims remains unknown, as the loss of main communications with remote islands of the archipelago has so far not allowed to assess the situation.

Help has begun to reach Vanuatu but it remains difficult to organise the distribution inside the country, as needs from other islands are not know and transport and communication to these areas are very expensive. 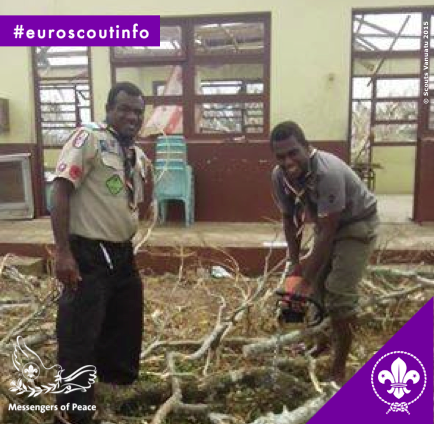 From the beginning the Scouts of Vanuatu  have been engaged as much as possible in their communities offering help and support to families. But human and technical resources are very limited. And financial resources are totally lacking.

Apart from fish, vegetables and other cultures present the main source for food. And now most of this is ruined. There is therefore an urgent need for food supplies, as it will take the farmers a couple of months to get their fields back to order once again.

But not only the agriculture will suffer from the impact of Pam for some time. The tourism industry, another main sector in the country’s economy, is also effected: it will take some months before visitors will again be able to discover the beauties of Vanuatu.

This is why the emergency funds provided through the Messengers of Peace Initiative of the World Organization of the Scout Movement is so much welcome and useful. It will put the Scouts of Vanuatu in a better position to help those most in need. And it will contribute to help families reconstruct their homes and sources of income.