(Bratislava/SLSK) – Elections of a new National Board and a vote on a series of proposed amendments were the highlights at the 16th General Assembly of Slovenský skauting (SLSK) held in the Slovak capital Bratislava on the weekend 17-19 October 2014. 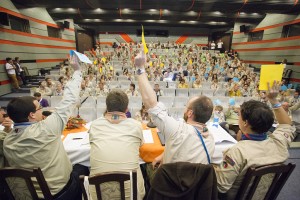 Before electing the new National Board, the assembly was presented with several proposals for changes of the association’s constitution: these included provisions that future board members should no longer be allowed to concurrently hold a position in a regional board (the organisational level between national board and local scout group); another proposal foresaw that henceforth, the association’s Chief Executive Officer would be the legal, statutory representative of SLSK. Both proposals were accepted by large majority.

“A more lively debate followed the presentation of a draft amendment”, recalls Marián “Mafián” Lezo, the association’s International Commissioner, “which would have SLSK register all female members with WOSM (while maintaining their membership with WAGGGS). We are really grateful to have had Manuela as representative of the European Scout Committee in attendance: she was able to explain WOSM’s viewpoint and provided answers to our delegates’ questions. This allowed us to have an informed debate of arguments in favour and against the proposal.”

The proposal to introduce the so-called Half-Super-SAGNO-Model in SLSK was finally accepted by the majority of the General Assembly. It will mean that all members of Slovenský skauting, female and male alike, will be able to get fully involved in all areas and on all levels of the World Organization of the Scout Movement (WOSM), including the governance levels, access to which had hitherto been limited to male members. 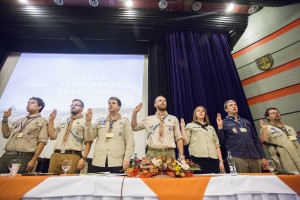 The team of Euroscoutinfo joins Scouts across the European Region and around the world in welcoming female members of Slovenský skauting to the family of World Scouting and thanks the members of the new National Board for having accepted to offer their expertise and commitment in their new volunteer positions!